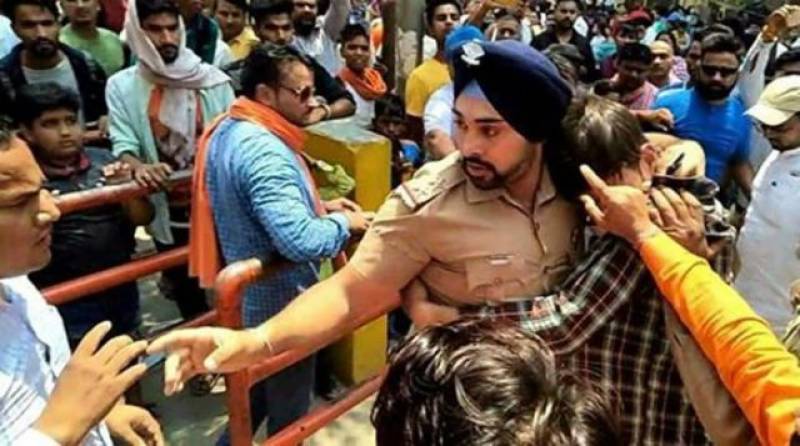 NEW DELHI: A Sikh Indian officer protected a Muslim man from an angry group of people in Ramnagar.

Ramnagar is situated in India’s Nainital district. The video of the act went viral on social media.

According to an Indian website, the Muslim man had come to meet a Hindu woman at a temple in the area. People present in the area began questioning the couple. They can be heard in the video asking the man to show his ID. When they found that the man was Muslim, commotion began. Members of the mob included people from Vishwa Hindu Parishad, a rightwing Hindu nationalist organisation, and its militant youth wing, Bajrang Dal. They heckled the Muslim man and the Hindu woman. They then tried to assault the man, when sub-inspector Gagandeep Singh prevented the mob from attacking him.

People are praising the officer as the act is uncommon in India.

The Indian website says couples in the area, both Hindu and Muslim, frequent this particular temple. According to Inspector Incharge Vikram Rathod, the man and woman were consenting adults. However, he said, the police called the woman’s parents to the police station and informed them about her meeting the man. According to Rathod, the woman was “wrong” in meeting the Muslim man without informing her parents. “If a Hindu and Muslim fall in love, it creates tensions here,” he said. “What would have happened if a Hindu boy was caught with a Muslim girl at a mosque? Imagine the chaos.”

Conservative Indian families are becoming increasingly hostile towards the idea of marriages between Hindus and Muslims. Radical Hindu groups have begun describing such marriages as “love jihad”. According to them, love jihad is part of a bigger conspiracy that aims at turning Hindu women against their religion. A number of cases of violence have been reported at times when conservatives found out that a Hindu and Muslim are dating. APP/AFP