Indian troops use brute force against peaceful protesters in occupied Kashmir
25 May, 2018 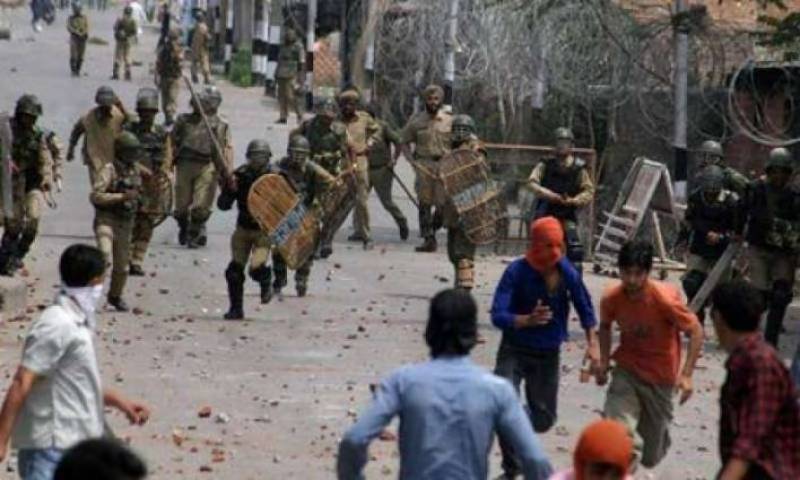 According to Kashmir Media Service, people took out a pro-freedom and anti-India rally after Juma prayers ended at historic Jamia Masjid in Nowhatta area of Srinagar.

The participants of the rally raised slogans in favour of freedom and against India.

The Indian troops deployed in the area fired pellets and teargas shells to disperse the protesters, triggering clashes between the demonstrators and the troops.

Chairman of Hurriyat Forum, Mirwaiz Umar Farooq, in a tweet while condemning the use of force against the protesters said the heavy deployment of Indian forces’ personnel outside the grand mosque leads to tension and agitation in the area.

Earlier, addressing a gathering at Jamia Masjid, Mirwaiz Umer Farooq expressed serious concern over increasing tension between Pakistan and India on Line of Control and Working Boundary and urged the two countries to settle the lingering Kashmir dispute.

People also staged demonstrations in Arwani area of Islamabad district against the arrest of several youth by the Indian police during nocturnal raids.

On the other hand, the Kashmiri detainees arrested by India’s National Investigation Agency and Enforcement Directorate and lodged in Delhi’s notorious Tihar Jail have written a letter to the Director General of Prisons and a court in New Delhi to lodge them together in a single cell or at least separate them from other prisoners who are in jail in criminal cases.