Why First lady Melania Trump did not wear head scarf in Saudi Arabia and did so in Vatican
25 May, 2017

US First Lady Melania Trump raised eyebrows as she arrived at the Vatican on Wednesday to meet Pope Francis, wearing a veil which she chose to forego during her trip to Saudi Arabia.

Melania, who is accompanying Donald Trump on his first foreign tour since he became president, wore a long-sleeved Dolce & Gabbana black dress and a black veil, a tradition followed by several first ladies before her. Other women accompanying Melania, including Ivanka Trump, wore black dresses and veils.

There was some confusion, however, over why the first lady wore a veil at the Vatican while she didn’t wear a headscarf in Saudi Arabia.

Stephanie Grisham, a spokesperson for the first lady, said Melania’s decision to wear a black lace veil known as a mantilla followed Vatican protocol that women who have an audience with the pope must wear long sleeves, formal black clothing and a veil to cover their head.

In Saudi Arabia, however, the government did not request that she wear a head covering, Grisham said, according to the Associated Press.

According to Rocco Palmo, editor of Whispers in the Loggia, a site on church news and politics, foreign dignitaries usually follow a dress code when visiting the Vatican, although that dress code started to relax under Pope Benedict XVI.

He added that only Catholic queens and the princess of Monaco can wear white while meeting the pope. Over the years, Pope Francis has relaxed many rules his predecessors followed in terms of dressing. “It’s been part of his message of simplicity,” Palmo said. 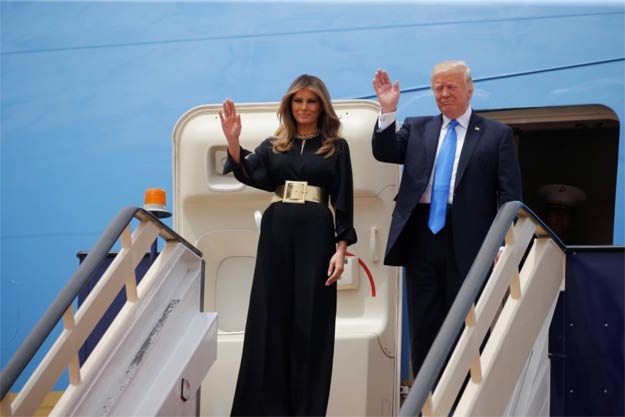 Donald Trump and Melania Trump wave as they arrive in Riyadh, Saudi Arabia, on May 20. PHOTO: REUTERS

Meanwhile, Muslim women in Saudi Arabia, are required to cover themselves from head to toe, but foreigners can choose if they want to wear a headscarf or not. Previously, Hillary Clinton and Laura Bush also visited Saudi Arabia without a headscarf.

Even though Melania didn’t cover her head on her visit to Saudi Arabia, she was dressed conservatively in a black jump suit. Similarly Ivanka, wore a full length dress with full sleeves but also decided to forego the scarf.