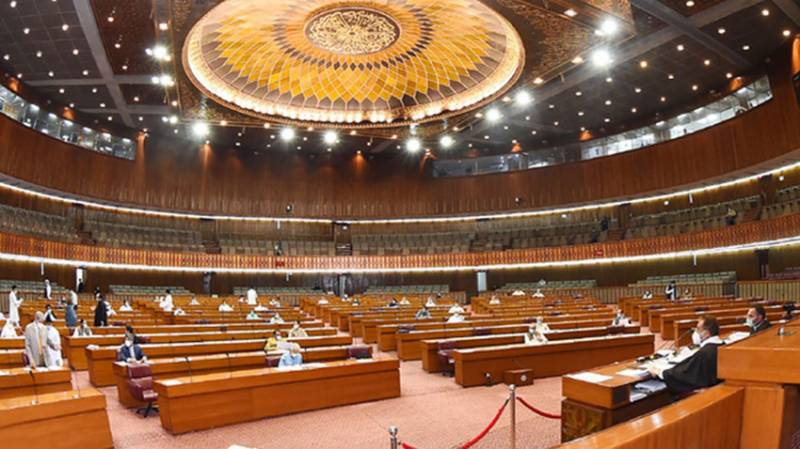 ISLAMABAD-The House is continuing discussion on the budget for next fiscal year.

Participating in the debate, Amir Dogar said a balanced budget has been presented for the next fiscal year in face of the challenge posed by COVID-19. He expressed the confidence the government will deliver on its promises as per the expectations of the masses. He said it is the first time that the health budget has been doubled to 115 billion rupees.

Ahsan Iqbal said a national effort is required to revive the economy as no single party can tackle the current challenges. He said the economic targets set for the next year are unrealistic. He said the growth cannot be achieved by cutting the development outlay. He said we need to invest in science and technology to take forward the country.

Jai Parkash was appreciative of the 1200 billion rupees stimulus package given by government to support different segments of the society amidst Covid-19.  He condemned the atrocities unleashed by the Modi government against Muslims in India and occupied Jammu and Kashmir.

Rao Muhammad Ajmal said the agriculture sector should be supported to ensure food security in these difficult times.  He said aircraft and other equipment should immediately be procured to fight locusts. He said apart from reducing input costs of the farmers, support price should be announced for the major crops.

Parliamentary Secretary for National Health Services Dr Nausheen Hamid commended the government for giving importance to the health sector in the budget. She said there are currently 129 laboratories across the country where the testing capacity for Coronavirus has significantly been enhanced.

Nasir Iqbal said relief should be provided to farmers to enhance the agriculture yield.

Shandana Gulzar Khan said it is a pro-poor, pro-business and pro-agriculture budget. She said the government launched Ehsaas Emergency Cash Program to save the people from starvation.

Begum Tahira Bukhari regretted that no increase has been given to the employees in the budget.

Muhammad Iqbal Khan said special focus should be given to the development of tribal districts. He said local government elections should be held in tribal districts to ensure immediate redressal of problems faced by the local people.

Malik Umar Aslam stressed for doubling exports and remittances to steer the country out of current economic challenges. He said technical education should be imparted to the youth so that they could exploit job opportunities both at home and abroad.

Minister for Maritime Affairs Syed Ali Haider Zaidi said Port Qasim Authority has registered the highest revenues over the last two years. He said Port Qasim remained operational regardless of the breakout of COVID-19. He said the industrial infrastructure plan of Port Qasim has been finalized. He said Afghan Transit Trade has been started from Gwadar Port. He said a shipping policy has been introduced to take advantage of the blue economy.