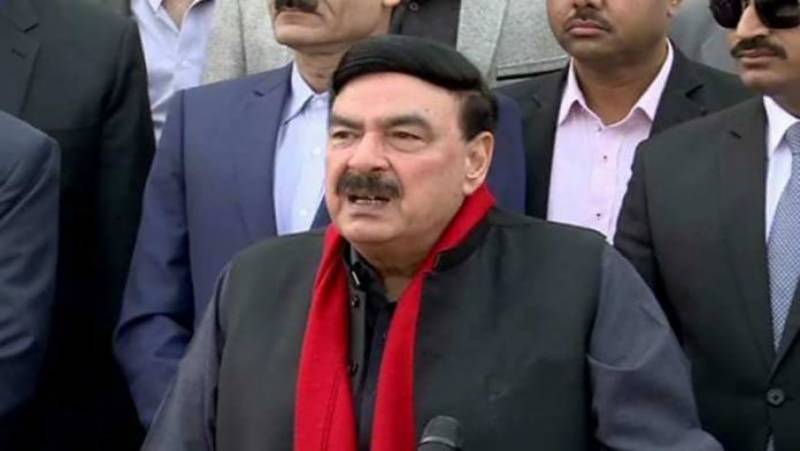 A seasoned politician and Awami Muslim League (AWM) chief Sheikh Rasheed Ahmad categorically stated that Lal Haveli has never fought the establishment in past and it will also not go against it in the future.

He also gave a hint at witnessing a ‘civil war’ in Pakistan due to the ‘Minus Imran Khan’ policy and arrests of Pakistan Tehreek-e-Insaf (PTI) leadership.

According to the 24News HD TV channel, Sh Rasheed addressed the party workers outside his residence, Lal Haveli in Rawalpindi on Wednesday. He expressed a hope that PTI’s arrested leader Fawad Chaudhry will be released soon.

Sh Rasheed said a meeting is going on to arrest Imran Khan who can be killed by slow poisoning in detention.

The ruling alliance, the Pakistan Democratic Movement (PDM) agenda is to remove the most popular and beloved leader of the nation Imran Khan, he added.

He said the nation will come out to the streets if Imran Khan will be jailed. He appealed to the Pak Army that they should not torture protesting people as if the people are in pain, then the army will also be in pain.

The seasoned politician also said that the next election will be one-way as people will use the polling tools of the ruling thirteen parties but will cast their vote for Imran Khan only.

The former interior minister said he is the most senior politician as he has served the nation politically along with Akbar Khan Bugti and Bacha Khan.

Sh Rasheed urged the people to start enrolling their names in Lal Haveli for ‘arrests’ to register their protest against the imported government’s oppression and Imran-Minus Formula.

The former minister said there has been a split in the Nawaz Sharif family. To a query, he said Interior Minister Rana Sanaullah Khan is a thief and a dacoit.