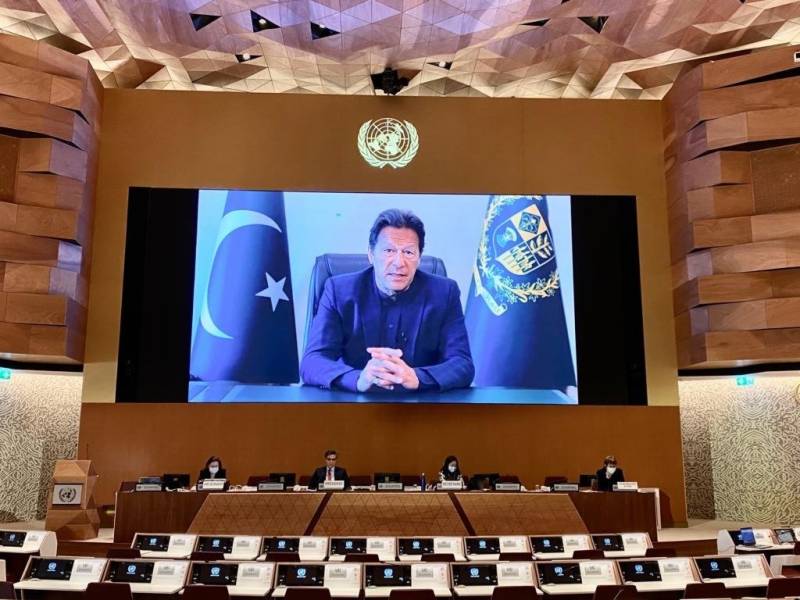 ISLAMABAD - Prime Minister Imran Khan Monday presented a five-point agenda to address the structural barriers in global prosperity, proposing equitable supply of COVID-19 vaccine to developing countries and suspension of debt repayments for most stressed countries until end of pandemic.

The prime minister, in his keynote address at the fourth session of virtually held United Nations Conference on Trade and Development (UNCTAD) Intergovernmental Group of Experts (IGE) on Financing for Development (FfD) in Geneva, called for a viable framework for equitable and affordable supply of COVID vaccine to developing countries.

“The coverage of the COVAX facility must be expanded. This would enable the developing countries to spend their precious resources on socio-economic development needs,” he said.

Calling the pandemic an opportunity to address the structural barriers hampering global prosperity and development, he suggested the suspension of debt re-payments for the most stressed countries until the end of the pandemic and restructuring of their public-sector debt under an agreed and inclusive multilateral framework.

Moreover, the expansion of concessional financing through multilateral development banks was also essential, he emphasized.

Reiterating his decades old stance of return of stolen assets held by corrupt politicians and criminals, the prime minister viewed that the illicit financial outflows from developing nations caused more poverty in that world than any other factor.

“Reportedly, a staggering amount of 7 trillion dollars is parked in “haven” destinations. And it is also reported that one trillion dollars annually leaves the developing countries for these “haven” destinations,” he told the meeting also addressed by prime minister of Barbados, vice president of Plurinational State of Bolivia, and second vice president of Government of Spain.

The fifth point of the proposed agenda was meeting the agreed target of mobilizing 100 billion dollars annually by developed countries for climate action in developing countries.

Terming the economic malaise and recession “highly communicable” like the coronavirus, Prime Minister Khan said the global policy measures, along the his proposed lines were urgently needed to save lives, revive economies, and build back better.

He thanked the UNCTAD Secretary-General for organizing the “extremely important” and said the world was grappling with a series of inter-linked and unprecedented public health and economic crises.

He said as the coronavirus did not discriminate between the rich and the poor, the most vulnerable people and countries had suffered the most.

“Millions are likely to fall back into poverty,” Khan feared.

He told the meeting that Pakistan’s efforts had been aimed at ensuring their protection from both COVID-related as well as hunger-related deaths.

“Our strategy fortunately has worked well so far. But continuous efforts are needed to fully overcome the second wave of the virus. And also at the same time to maintain and stimulate economic growth,” the prime minister said.

He said the COVID-19 vaccines were now being administered in developed countries but seemed that it will take much longer time for the vaccine to fully cover the global South.

He viewed that the sustainable development would remain elusive as long as the pandemic persisted. Developing countries are trapped between recovering from the pandemic and meeting their debt servicing obligations, he added.

He said in April last year, he had called for a ‘Global Initiative on Debt Relief’ for creating fiscal space and reviving economic growth for developing countries.

“But I am afraid much more needs to be done on this account. Otherwise, achieving the Sustainable Development Goals by the target date of 2030 will remain a daunting challenge,” he remarked.