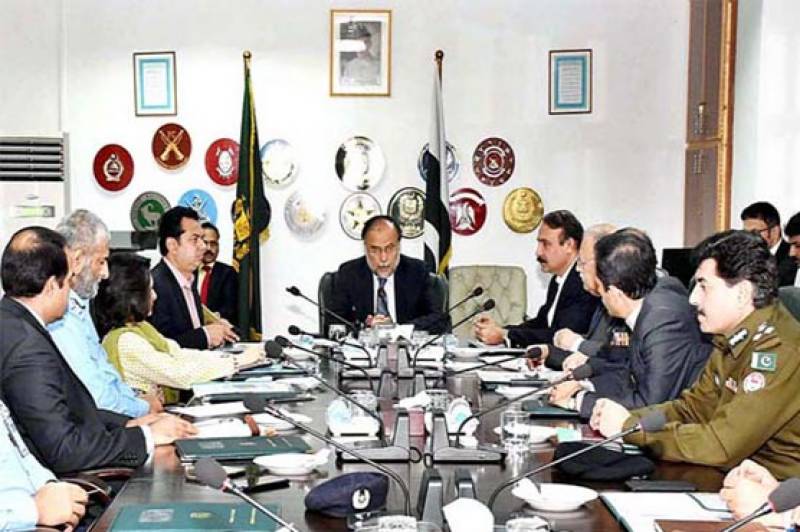 ISLAMABAD: Interior Minister Ahsan Iqbal Monday chaired a meeting to review security arrangements of the federal capital and directed that safety in Red Zone should be ensured at all cost and no political or religious party should be allowed to violate or sabotage rules and regulations enunciated for the capital by the High Court.

In the wake of a call from some religio-political groups staging rallies and processions in the capital, the Interior minister stated that nobody would be allowed to disrupt law and order situation in the capital and the elements found in any nefarious activity would be dealt sternly.

He said some elements were trying to exploit the finality of Prophet Muhammad (SAW) issue for political gains, however there was no reality in the allegations.In the meeting, the minister asserted that Pakistan need stability and harmony in wake of the war against terrorism. Internal solidarity was key to our success and some anti state elements were fueling controversies to disrupt it, he added.

He said every citizen was free to exercise his democratic rights within the limits of law. Those taking law into own hands would be dealt with sternly.The Interior minister said street agitation and violence in the capital would damage the international image of Pakistan.

The minister had directed to beef up the security of Red Zone and Diplomatic Enclave in Islamabad in order to avoid any unpleasant incident.

He said some elements had ambitions to disrupt peace in the country. The Interior minister also noted that politics of violence and agitation was against the teachings of Islam and notable section of Islamic scholars should come forward and play their due role by imparting the true teachings and message of Islam.

It was need of the hour to unite the whole nation and people should stay away from those political and religious groups whose agenda was to sow rift and dissension in the social fabric of the country.