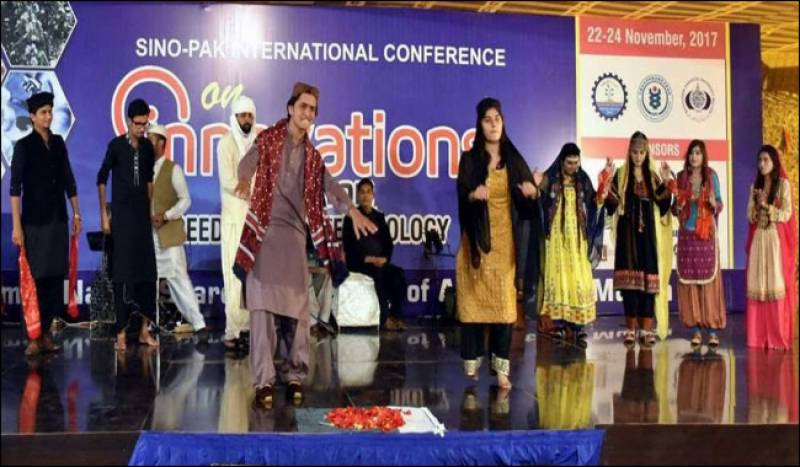 Chinese and Pakistani audiences really enjoyed the cultural night after the brainstorming sessions of conference.

The Chinese scripted play highly attracted the audience. The theme was doctors charging heavy fees at the cost of poor medical treatment. The Chinese play described how doctors force patients to buy costly medicine from their medical store.

The most successful aspects of the conference was holding Sino-Pak International conference yearly, Material Transfer Agreement between China and Pakistan in next two years and transfer of Chinese Genetic Engineering Technology and Functional Genomix Technology to Pakistan. The technologies have resistance against all types of cotton diseases.

Speaking at the concluding session MNSUA vice chancellor Prof Dr Asif Ali said that China has deep association of understanding with Pakistan in all fields. The completion of China-Pakistan Economic Corridor would strengthen relations between both the countries. He said China is ready to extend his expertise in removing problems being faced by Pakistani cotton. Pakistan would have to use Chinese cotton technology in future.

The vice chancellor said that the MNSUA was making efforts signing agreement with China on Material Transfer Agreement in the next two years. The Chinese technology would be transferred to agriculture stakeholders. The cotton is the prime crop of the country.

Speaking at the conference Chinese scientist Dr Zhang Rui said that China has developed resistance varieties against all types of diseases by using Genetic Engineering and Functional Genomix Technologies. More 200 BT cotton varieties are cultivated in China and China is ready transferring those technologies to Pakistan.