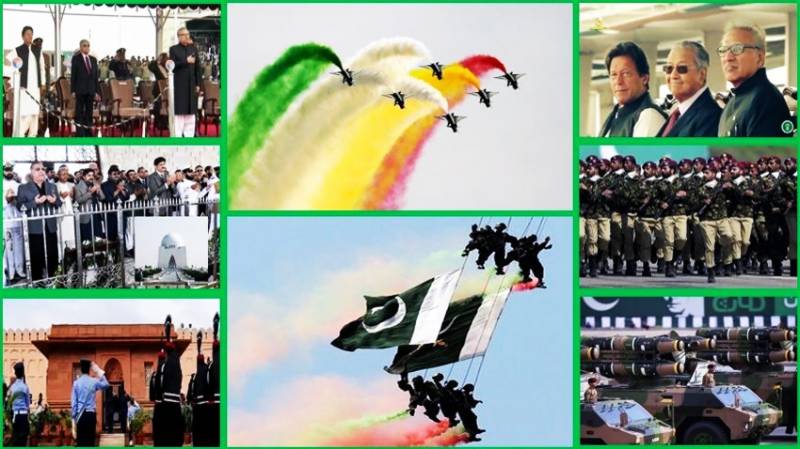 The nation observed Pakistan Day today with a renewed pledge to make Pakistan a developed and progressive country with a strong defence on Saturday.

Today's ceremonies mark commemoration of the passage of Lahore Resolution on this day in 1940, under which the Muslims of the sub-continent set the agenda of a separate homeland for themselves.

Special prayers were offered in mosques after prayers for progress and prosperity of the country.

The main feature of the day was a spectacular military parade at Parade Avenue in Islamabad where three wings of the armed forces demonstrated their professionalism and military prowess.

While crossing the dais in an airplane on the auspicious occasion of Pakistan Day Parade today, the Air Chief using the radio communication from the aircraft saluted the resilience of Pakistani nation in his words, "Make no mistake; we will always safeguard Pakistan."

He further communicated saying presenting to you our wings of freedom and the guardians of your skies. Pakistan Zindabad.

Air Chief led the formations of PAF fly-past aircraft on the auspicious occasion.

Keeping the tradition of his predecessors, Air Chief Marshal Mujahid Anwar Khan flew over the venue in an F-16 Block 52 aircraft performing a magnificent vertical roll over the parade square.

The fascinated audience fervently watched and went ecstatic to see the aircraft of Air Chief disappear in the sky.

Earlier, the Air Chief arrived at an Operational Air Base of Pakistan Air Force to lead the PAF formations participating in Pak Day Parade fly past. He met with the combat air and ground crew at the base and lauded their extraordinary level of devotion and motivation.