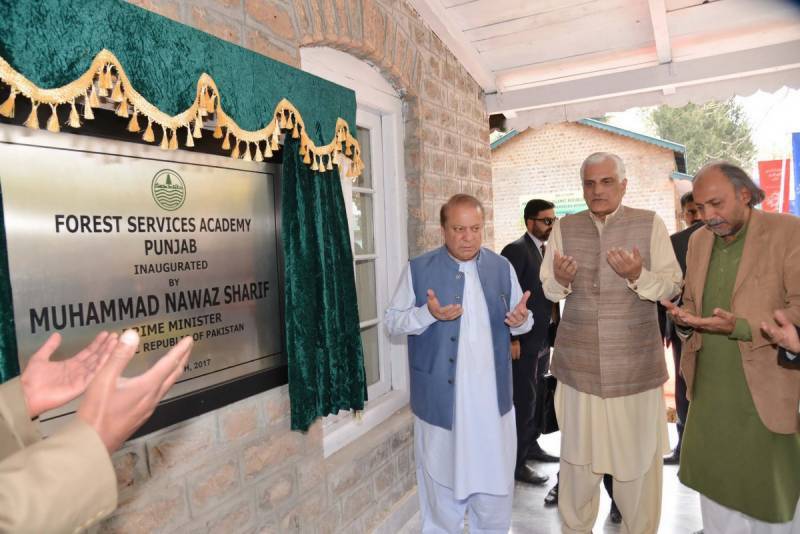 The Prime Minister unveiled the plaque of the Forest Services Academy, which will provide in-service and post-graduate training in forest sciences.

The Prime Minister planted a sapling at the Academy's premises and visited its various sections besides interacting with faculty members and students.Minister for Climate Change Zahid Hamid was present.

PM's focal person on Climate Change, Syed Rizwan Mehboob briefed the Prime Minister about the features of the Academy and its objectives to help mitigate climate change and undertake research on forestry.

The Prime Minister was told that Academy's first phase had been completed with a cost of Rs 59.29 million, while the second phase to be finished by 2020.

He was informed that a sub-campus of the Academy had been set up in Bahawalpur so as to train the forest officers in accordance with the eco-system of desert.

He was also apprised that the Academy had been established at a 150-year-old school building, covering an area of 22 acres of land.

The Prime Minister directed to retain the original character of the old building during the process of its restoration.

He also directed to workout provision of supply of water and natural gas to the Academy.

The Prime Minister was also briefed about the status of forestation in Bahawalpur's iconic Lal Sohanra Park, where 1,200 acres of land had been given tree-cover, while 5,000 acres would be planted in three years.

He directed to improve the natural environment of the Lake to attract birds followed by completion of de-silting of Patisar Lake.

The Prime Minister emphasized on involvement of local people through Community Based Organisations to protect the environment and preserve wildlife.

Earlier, PM's focal person Rizwan Mehboob told APP that the establishment of Forest Academy was in connection with Prime Minister Nawaz Sharif's Green Pakistan vision, which would work on capacity-building of forest officers.

He mentioned that the Prime Minister on International Day of Forests had already released Rs 553 million as first tranche of Green Pakistan Fund, for disbursement among these provinces, AJ&K, Gilgit-Baltistan, and FATA.

Rizwan Mehboob said the provinces had designated the areas for plantation which would also be monitored through GIS (Geographic Information System).