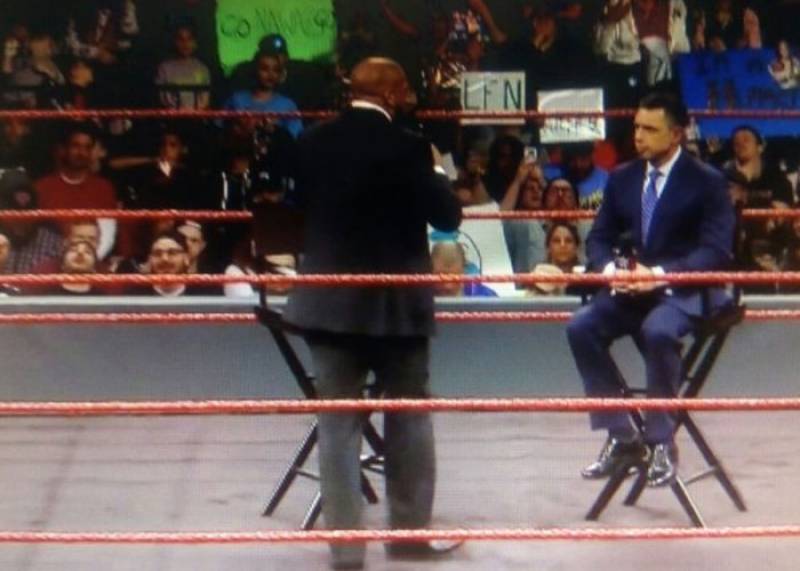 A photo doing the rounds on social media caught everyone’s eye in which a Pakistani fan (apparently) is holding up a sign which states ‘Go Nawaz Go’. What’s most strange is the fact that the person holding the sign is doing so in a WWE arena, during a segment of RAW!

In a segment of the show, Triple H can be seen talking about his rivalry with another fellow superstar. It’s customary of WWE fans to display signs in favour and against their favourite WWE superstars. However, this one poster was apparently from someone who despised Prime Minister Nawaz Sharif since it read ‘Go Nawaz Go’.

‘Go Nawaz Go’ became a popular slogan during PTI’s anti-government dharna campaign in 2014 when Imran Khan along with his political ally Tahir-ul-Qadri and his PAT, took to the streets against the Nawaz-led government. A sit-in protest was staged that ultimately came to no avail as Khan ultimately had to call it off after four months when the APS massacre demanded national unity.

Most recently, spectators at the Gaddafi stadium chanted ‘Go Nawaz Go’ during PSL chairman Najam Sethi’s speech, almost drowning out his voice. The slogan can be found written on the back of buses, rickshaws, on bathroom walls and other spaces in Pakistan.

And now, we can claim that it is witnessed even in WWE arenas, of all places.