Pakistan to effectively use SCO platform for counter-terrorism
24 Jun, 2016 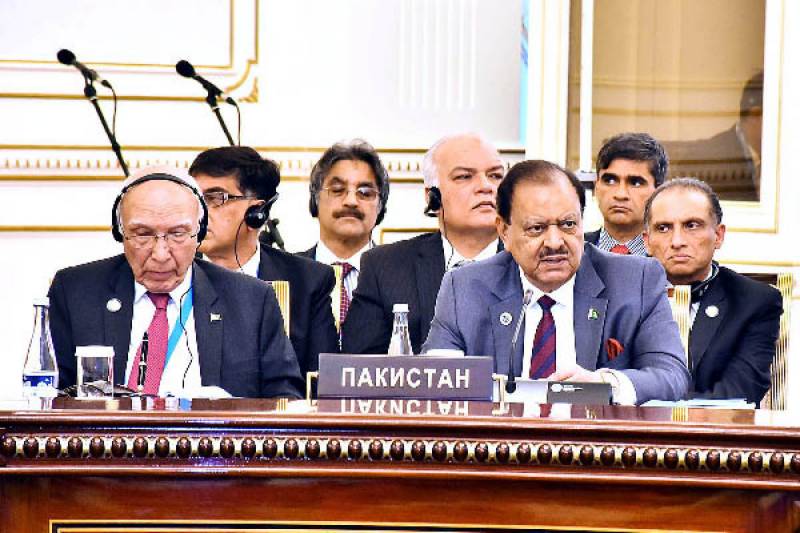 TASHKENT: (APP) President Mamnoon Hussain on Friday, terming terrorism as the greatest challenge for Pakistan, said becoming full member of Shanghai Cooperation Organization (SCO), would enable the country to have a better and effective platform to fight this menace.

"We believe that the SCO provides the right security overhang under which we can fight this menace," the President said in his address at the 16th Council of Heads of State of Shanghai Cooperation Organization held here in the Uzbek capital.

The representatives of Iran, Belarus and Mongolia were also present.

President Mamnoon Hussain, who addressed the SCO forum in Urdu language, said Pakistan's aim of curbing extremism and enhancing border security were in line with the objectives of SCO.

"Pakistan understands better than any other country that terrorism poses the greatest challenge to our vision of common prosperity. No other country has made greater sacrifices in fighting the forces of terrorism, separatism and extremism," he added.

He said Pakistan had met every move, made by these "dark forces" with firm resolve and with force whenever necessary and added that it remained committed to fighting terrorism in all its forms and manifestations.

The President said the ongoing comprehensive and all-out law enforcement action `Zarb-e-Azb' was against all terrorists groups without discrimination.

"I am happy to inform you that we turned the corner and achieved phenomenal success. The backbone of the terrorists had been broken and their main infrastructure has been dismantled," he told the SCO leaders.

President Mamnoon said Pakistan firmly believed that the path to regional peace and stability lied in economic connectivity and development and mentioned that the country offered significant overland routes and connectivity for trade and energy transactions within the region and beyond.

"In that context, the China-Pakistan Economic Corridor (CPEC), implementation of which is now in full swing, serves as the natural link between the SCO states and the Arabian Sea and South Asia," he added.

He said the CPEC would bring the SCO a step closer to achieving its vision of regional economic integration and strengthen the SCO's endeavors for the promotion of peace, security and harmony in the region.

President Mamnoon said Pakistan was committed to take its engagement with SCO to the next level and start actively participating in the Organization's activities.

"Today is a significant moment for SCO and Pakistan. As the SCO celebrates its 15th Anniversary, we rejoice by signing the Memorandum of Obligations with this prestigious organization," he said, terming it a major step towards attaining full membership.

He thanked the member countries of Shanghai Cooperation Organization for their support to Pakistan in its journey towards the path of becoming a full member of SCO.

He assured that Pakistan would further strengthen its relationship with SCO and make its contribution for regional peace, stability and development as well as support cooperation against terrorism and extremism.

The President said Pakistan fully subscribed to the principles of SCO, enshrined in its Charter and endorses SCO's aims and objectives by adhering to the "Shanghai Spirit" in its relations with SCO member countries.

He expressed confidence that SCO's expansion would prove a watershed in the changing geo-political landscape of the Eurasian belt.

He said since its founding, the SCO had become an important guarantor of peace in the region by upholding the territorial integrity and security of its member states as well as their political, economic and social stability.

He mentioned that Pakistan shared deep-rooted historical and cultural links and strong economic and strategic complementarities with member states of the SCO, adding their interests and objectives intersect across a wide range of areas and issues.

The President said Pakistan had invested great effort in ensuring peace and stability in the region with a view that economic development, being the common dream of all SCO countries, would remain out of reach if threats to regional peace and security were not comprehensively addressed.

He said SCO provides a useful forum to Pakistan in promoting peace and stability in South Asia including Afghanistan, and termed regional stability the key to economic progress of nations.

Peace in Afghanistan is crucial to regional connectivity and trade cooperation, he added

Uzbek President Islam Karimov earlier welcomed the SCO leaders at the Organization's platform and said the SCO states with mutual cooperation would bring peace and prosperity to the region.

SCO Secretary General Rashid Alimov highlighted the importance of SCO and its activities in the realm of the Organization's Charter.