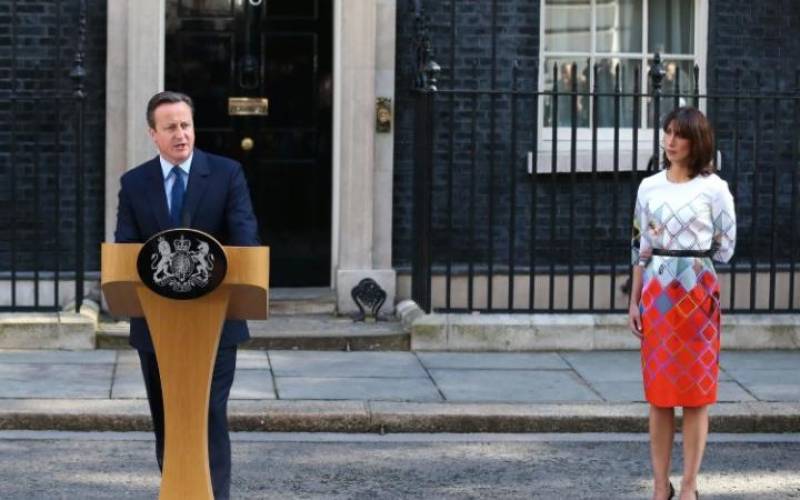 LONDON: (APP) Britain has voted to break away from the European Union, toppling Prime Minister David Cameron and dealing a thunderous blow to the 60-year-old bloc which sent world markets plummeting on Friday.

Cameron said he would resign to make way for a new leader by early October after voters opted to exit the 28-nation alliance in defiance of his predictions of economic disaster and isolation.

Britons, many worried by high levels of immigration, voted 52 percent to 48 percent to quit in Thursday's historic referendum, a move that could risk the breakup of the both the United Kingdom and the European Union.

"I do not think it would be right for me to try to be the captain that steers our country to its next destination," Cameron said in a speech outside Downing Street as sterling, global stocks and oil prices plummeted.

Britain will be the first country ever to leave the EU after decades of suspicion over aims of ever-closer political union, scoring a shock victory for the anti-establishment rhetoric of the Brexit campaign.

German Chancellor Angela Merkel called the result a "blow" to Europe while French President Francois Hollande said it was a "grave test".

But European Commission chief Jean-Claude Juncker flatly denied it was the beginning of the end for the EU, already troubled by growing euroscepticism, economic and migration crises.

Cameron, who led the campaign for Britain to stay, said it should be his successor who begins complex negotiations on pulling Britain out of the EU, a process which could last a decade.

Top Brexit campaigner Boris Johnson, the former mayor of London and a favourite to succeed Cameron, also said there was "no need for haste".

But European chiefs said the country, which first joined the then European Economic Community in 1973, should start the process "as soon as possible".

"We now expect the United Kingdom government to give effect to this decision of the British people as soon as possible, however painful that process may be," said a joint statement by the European Commission, Parliament and Council leaders.

Leaders of the EU, a bloc born out of a determination to forge lasting peace after two world wars, will open a two-day summit on Tuesday to grapple with Britain's decision.

"We've done it! We've won!" anti-EU campaigners shouted at a party in Westminster, as "Leave" victories flowed in. "Out! Out! Out!", they chanted as dawn broke.

In the City of London financial district, many people were much more downbeat.

Francesca Crimp, who works for a bank, cried as she said she was "scared" by the result.

"I just feel so devastated that this multicultural city that I live in is going to change drastically, and the world as I know it is just not the same today," she told AFP.

The result -- after a deeply polarising and often toxic campaign -- threatens the very unity of the United Kingdom, with Scotland and Northern Ireland voting to remain in the EU.

Scotland's First Minister Nicola Sturgeon said a second independence vote was now looming after a similar referendum in 2014 voted to stay part of the UK.

"The option of a second referendum must be on the table and it is on the table," she said.

Top anti-EU campaigner Nigel Farage, leader of the UK Independence Party, said June 23 should "go down in our history as our independence day".

However, the result drove sterling down 10 percent to a 31-year low of $1.3229. European stock markets dropped around eight percent at the opening bell. British banking shares lost a quarter of their value in morning trade.

The Bank of England promised to take "all necessary steps" to secure market stability.

"It's a madhouse in here. It has been a bloodbath. Carnage," said David Papier, head of sales trading at foreign exchange house ETX Capital in London.

Voters appeared to have to shrugged off warnings that a Brexit would create a budget hole requiring spending cuts and tax increases once they lose unfettered trade access to the EU.

Their decision will reawaken fears of a domino-effect ripple of exit votes in eurosceptic member states that could imperil the integrity of the bloc.