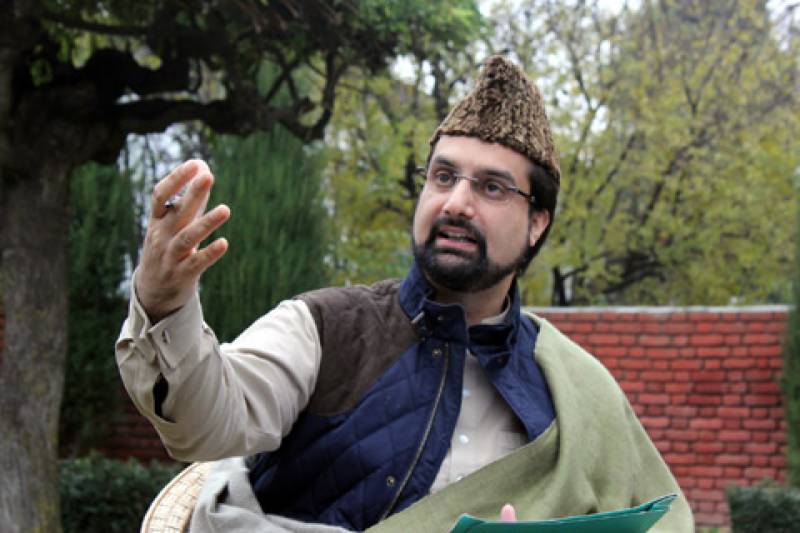 ISLAMABAD, Jun 24 (APP): APHC will not allow handing over of Kashmir to RSS

Chairman of his own Hurriyet Forum, Mirwaiz Umar Farooq, has said that the puppet Chief Minister, Mehbooba Mufti, will not be allowed to hand over Kashmir to RSS on a platter.

According to KMS, Umar Farooq addressing a function in Srinagar strongly condemned Mehbooba Mufti for her remarks against preachers and clerics. The function was held at Aali Masjid in Srinagar to mark the death anniversary of Mirwaiz Molvi Yousuf Shah.

He maintained that joint resistance against setting up of colonies for Indian soldiers, separate townships for Kashmiri Pandits, permanent settlement of refugees and anti-Kashmir Industrial Policy would continue despite the crackdown of the puppet administration on the resistance leadership.

"They think they will hand over Kashmir to RSS, but we will not allow it to happen," he said.

The Mirwaiz strongly reacted to Mehbooba Mufti's statement that religious clergy should maintain silence over public issues. He pointed out that members of the so-called Kashmir Assembly were strengthening the Indian occupation and did not care for rights and interests of people of Kashmir. He said that these so-called representatives do not remember people at the time of natural disasters, restrictions during curfews, and ignore their suffering during inflation, black-marketing and hoarding.

"These people even abandoned the masses during the September-2014 devastating floods when the entire government vanished from the ground," he stated. He said that it was the religious institutions and leadership that came forward at that time and helped the flood-hit people.

"Before pointing fingers at others, these people should take stock of the miseries and oppression they have subjected the people of Kashmir to since 1947.

Even today when the masses protest against the anti-people policies, they are dealt with bullets, detentions, restrictions, harassment and arrests," he added.

He made it clear that the historic platform of Jamia Masjid - where he delivers sermon on every Friday - would continue to represent aspirations of the Kashmiri people.

The Mirwaiz said, "By using force and oppression, the people's movements have neither been crushed in the past nor would they be able to do so in future and Kashmir dispute will be resolved as per the wishes and aspirations of the people of Kashmir."

He said that the All Parties Hurriyet Conference Chairman, Syed Ali Gilani and the Jammu and Kashmir Liberation Front Chief, Muhammad Yasin Malik, were also invited to participate in this event but could not make it due to the house arrest and illegal detention respectively.