Rise of ISIS in Afghanistan: A threat bigger than Al Qaeda
24 Jul, 2016 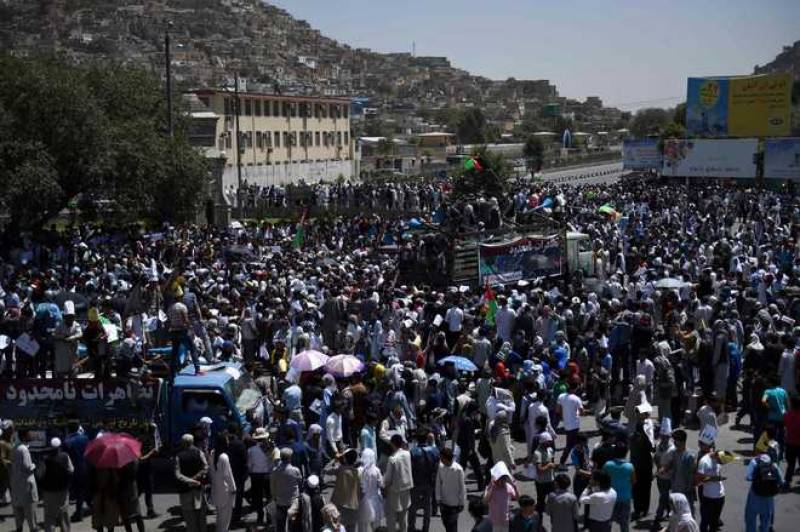 KABUL: (APP) Islamic State militants claimed responsibility for twin explosions Saturday that ripped through crowds of Hazaras in Kabul, killing at least 80 people and wounding 231 others in the deadliest attack in the Afghan capital since 2001.

The bombings during a huge protest over a power line mark the first major IS assault on the Afghan capital, apparently aimed at sowing sectarian discord in a country well known for religious harmony.

Charred bodies and dismembered limbs littered the scene of the attack, with ambulances struggling to reach the site as authorities had overnight blocked key intersections with stacked shipping containers to control movement of the protesters.

"As a result of the attack 80 people were martyred and 231 others were wounded," the interior ministry said.

"Based on initial information, the attack was carried out by three suicide bombers... The third attacker was gunned down by security forces."

The Taliban, who are in the middle of their annual summer offensive and are more powerful than IS, strongly denied any involvement in the attack.

The Islamic State group claimed the bombings in a statement carried by its affiliated Amaq news agency, calling it an attack on Shiites.

"Two fighters of the Islamic State detonated their explosive belts in a gathering of Shiites in... Kabul," Amaq said.

The attack represents a major escalation for IS, which so has largely been confined to the eastern province of Nangarhar.

"It's long been a fear about Afghanistan that IS-aligned forces will try to inject a sectarian dimension into a largely non-sectarian conflict," Michael Kugelman, an analyst at the Woodrow Wilson Center in Washington, told AFP.

The National Directorate of Security, Afghanistan's main intelligence agency, said the attack was masterminded by Abu Ali, an IS commander in Nangarhar's volatile Achin district.

The bombings mark the deadliest single attack in the Afghan capital since the Taliban were toppled from power in a 2001 US-led invasion, the interior ministry said.

President Ashraf Ghani vowed "revenge" against the perpetrators of the attack and announced Sunday as a national day of mourning.

The assault came as thousands of demonstrators gathered to demand that a multi-million-dollar power line pass through their electricity-starved province of Bamiyan, one of the most deprived areas of Afghanistan with a large Hazara population.

"The horrific attack on a group of peaceful protestors in Kabul demonstrates the utter disregard that armed groups have for human life," Amnesty International said in a statement.

"Such attacks are a reminder that the conflict in Afghanistan is not winding down, as some believe, but escalating, with consequences for the human rights situation in the country that should alarm us all."

The protest march was largely peaceful before the explosions struck as the demonstrators sought to march on the presidential palace, waving flags and chanting slogans such as "death to discrimination".

The 500-kilovolt TUTAP power line, which would connect the Central Asian nations of Turkmenistan, Uzbekistan and Tajikistan with electricity-hungry Afghanistan and Pakistan, was originally set to pass through the central province.

But the government re-routed it through the mountainous Salang pass north of Kabul, saying the shorter route would speed up the project and save millions of dollars.

Hazara leaders in the ethnically divided nation lashed out at the Pashtun president, calling the decision prejudiced against the Hazaras, a community that has suffered a long history of oppression.

The three million-strong Hazara community has been persecuted for decades, with thousands killed in the late 1990s by Al-Qaeda and the mainly Pashtun Taliban.