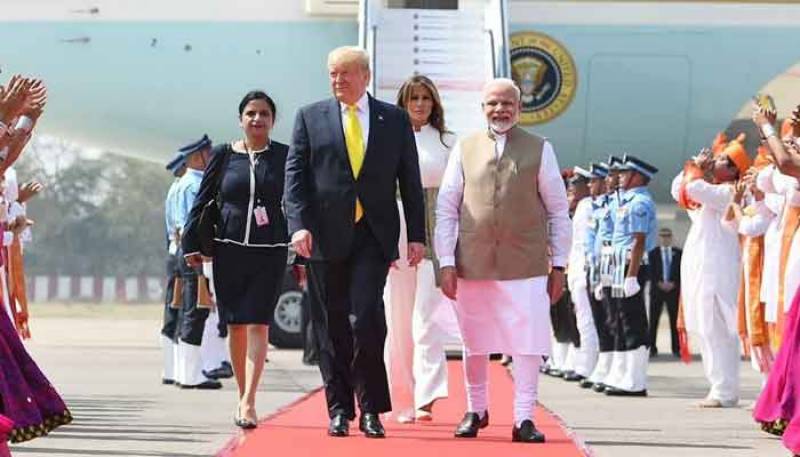 AHMEDABAD: United States President Donald Trump on Monday said that the US had a very good relationship with Pakistan and that Washington was working with Islamabad in a very positive way.

Trump made the comments while addressing the *Namaste Trump* event in Ahmedabad alongside Indian Prime Minister Narendra Modi. "Since taking office, my administration is working in a very positive way with Pakistan," Trump said, according to the *Indian Express*.

"Our relationship with Pakistan is a very good one. Thanks to these efforts we are beginning to see signs of big progress with Pakistan and we are hopeful for reduced tensions, greater stability and the future of harmony for all of the nations of South Asia," Trump added. Trump announces defense deal

Trump arrived in India earlier on Monday for his maiden visit to the country. The president was accompanied by his wife Melania, daughter Ivanka, son-in-law Jared Kushner and top brass of his administration, reported *Indian Express.*

Trump and Prime Minister Narendra Modi were due to address a huge rally of around 100,000 people at the world’s biggest cricket stadium in Modi's home state before Trump and First Lady Melania fly to the Taj Mahal.

Ahead of his departure to India, the US president tweeted, "I hear it’s going to be a big event, some people say the biggest event they ever had in India. That´s what the prime minister told me".

Things could hardly be going better for the Republican as his campaign for reelection in November gathers pace, following his acquittal earlier this month after the House impeached him for abuse of power related to pressure on Ukraine.

Despite a first term dogged by near constant scandals and investigations, Trump feels he can win against the growing Democratic frontrunner, leftist Bernie Sanders, and he is clearly chuffed at the idea of huge crowds in India.

"I look forward to being with the people of India," Trump said as he left the White House on his first trip to India. "We’re going to have many millions and millions of people," he said. "I hear it's going to be a big event, some people say the biggest event they ever had in India. That's what the prime minister told me."

Trump has something of an obsession with big crowds, frequently boasting about the size of his rallies, compared to those of his Democratic opponents.

Enormous crowds are guaranteed during the one-night trip, given Modi's own prowess at staging mega-rallies. But Indian officials said they didn't expect more than 100,000 people at any one time. The figure of millions touted repeatedly by Trump may be the result of a misunderstanding or translation problem, experts said.

Modi visited the United States last year, when he and Trump made a joint appearance before tens of thousands of Indian-Americans at a football stadium in Houston. -APP/AFP