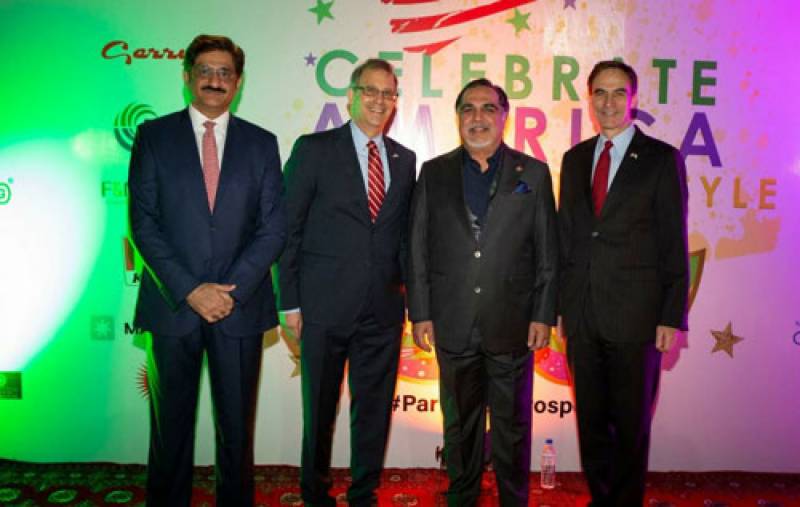 Speaking before a huge gathering of guests at the 244th Independence Day celebrations of his country at the Consulate General, he felt happy that Pakistan is already among the principle recipient of US military supplies and training apart from huge investment and growing contact between businessmen of the two countries, which solidifies the trade and investment further.

As usual, the celebrations were truly warm this year also. Although US Independence Day is celebrated on July 4, to commemorate the 1776 Independence Day treaty after long civil war in a continent, surrounded by sea, with only two roadways from Mexico and Canada, but the warmth never subsided. Secondly, invitees to join their American friends on their memorable, and historic day with equal response and sentiments.

A military parade of US Marines, was, like before, and was added attraction this time also, but despite lack of space for parking, the turn-out reflected enthusiasm as almost every Pakistani is aspirant to see the massive landmass and, rivers, oceans, lakes, mountains etc, and the warmth and hospitability which he feels while being in that enormous country.

Frankly, New York and Washington do not reflect the true picture of America, as the countryside, and the States from Virginia in the East and San Fransisco in the West people are lion hearted, excel in hospitality for foreigners, and are tremendous in nature.

That feeling was hugely felt in that reception two days ago, when Governor Imran Ismail, and Chief Minister Murad Ali Shah, both came to share the joy and pleasure of their American hosts. Prominent among the guests were former minister Nisar Khuhro, ex-senator Nasreen Jalil, MQMs Faisal Sabzwari, and among the diplomats were Consuls general of Germany Eugen Wollfarth, of Qatar Mishal Ansari, of Oman Salem Yousif Alhamdan, or Indonesia Totak Prianamto, of Japan Toshikazu Isomura, eminent businessmen Majyd Aziz, Byram Avaari and wife Goshpi, Zia Ispahani, Arif Balagamwala, the Baig brother, Ikthiar and Ishtiaq, Editor in chief of Pakistan Observer, Faisal Zahid Malik, and a lot more. The Ambassador remarked that US trade and Investment is to the tune of 4.5 billion U dollars, Of this 1.5 billion US dollars came in last five months, He said he was in Pakistan for 18 months, and thoroughly enjoyed his stay.

Diversity of culture is another factor similar to them. The Governor and chief minister reciprocated the sentiments, and felt happy to be there to share their joy.