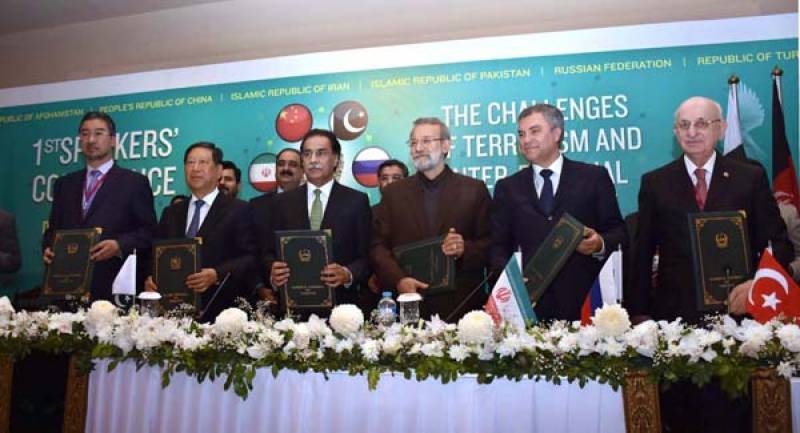 They discussed the significance of peace, development and connectivity among the conference participating states and held in-depth and useful discussions to explore ways for forging a partnership in these mutually reinforcing areas.

The conference recognized that peace was a prerequisite for achieving development and promoting connectivity among the countries and respective regions, agreeing on the need for more engagement and dialogue among the Parliaments, government and the people.

The speaker also deliberated on the diversity and interconnectedness of challenges and opportunities at the regional and global levels, besides discussing the transformation of the world into a pluralistic multi-polar world where Asia was leading the march towards globalization through inclusive cooperation with the rejection of hegemonic approach or use of force, promoting equality of opportunities for all nations and peoples.

They exchanged views on entire spectrum of bilateral, regional and international issues in a warm, cordial and friendly manner.

Speakers of the international conference acknowledged the shared bonds of history, culture and values between the peoples of the participating countries, reiterating common resolve to comprehensively the relations across all security, economy and trade.

They noted with concern the increasing links between drug trafficking and other forms of transnational organized crime and terrorism.

The moot desired to maintain the momentum of high level exchanges and consultations, providing impetus for deepening of ties among the countries.

The speakers stressed that cooperation among the states contributed to the strengthening of peace, prosperity and stability for the peoples living in the region, expressing satisfaction on multilateral cordial and close cooperation at regional and multilateral fora.

They agreed to further strengthen collaboration within the framework of the United Nations, Shanghai Cooperation Organization and other regional and international organization, reaffirming the sovereignty, territorial integrity, political independence and unity among the conference participating states.

The conference endorsed that connective was a key priority area of cooperation, together with other agreed priority areas, besides it recognized that enhancing intra-regional connectivity would benefit all participating countries through enhanced trade, investment, infrastructure, tourism, people-to-people linkages and cultural exchanges.

It reaffirmed support for the effective and timely implementation of all the regional connectivity initiatives including infrastructure development, institutional linkages and people-to-people connectivity.

The speakers said they would ensure support and facilitation to further relevant cooperation among the participant countries in mobilizing resources and expertise, information sharing and identifying specific cooperation projects for improving connectivity.

“We will promote greater awareness within the public and private sectors on the benefits of connectivity, including its potential economic opportunities, through the conduct of outreach and advocacy activities such as symposiums, workshops, seminars, business missions and courses,” they said.

The speakers said they would encourage greater engagement and cooperation in people-to-people connectivity initiatives, including those relating to education, human resource development, innovation and entrepreneurship, cultural exchanges, and tourism.

“We welcome and support the Belt and Road Initiative, highly commend the success of the Belt and Road Forum for International Corporation held in May, 2017 by China. We are committed to strengthening dialogue and consultation in order to build synergies in development strategies and deepening practical cooperation in various areas,” they said.

Recognizing that terrorism was a common threat to the entire world, including our countries, the participants condemned this phenomenon in all its forms and manifestations. “We recommend that our governments shall take further strong measures and practical steps through devising joint concrete and comprehensive strategies to combat terrorism.”

The conference reaffirmed that terrorism could not and should not be associated with any religion, nationality, civilization, culture or ethnic group, underscoring the central role of the United Nations in the field of counter terrorism and calling for full and effective implementation of relevant, United Nations Security Council Resolutions and Global Counter-Terrorism Strategy.

“We also underline the primary responsibility of states in combating terrorism at both national and international levels. We spoke in favor of effective cooperation in preventing and countering the spread of terrorist ideology and propaganda, including incitement and glorification of terrorism,” the speaker said.

The moot strongly condemned the acts of terrorism, targeted towards the parliaments and expressed solidarity with the victims as well as the governments and people of the countries attacked. “We express our resolve to stand by the Republic of Turkey in bringing to justice the perpetrators of July 15 terrorist coup attempt and other crimes.”

The conference agreed that for ensuring global and regional peace and stability, the issue of Jammu and Kashmir needed peaceful resolution by Pakistan and India in accordance with UN Security Council resolutions.

The speakers condemned the decisions and actions, which purported to have altered the character, the status of demographic composition of the holy city of Al-Quds, declaring them null and void having no legal effect. “We reaffirm our commitment to the Middle East settlement based on international law.”

They welcomed the recent significant achievements in defeating DAESH in Iraq and Syria, and recognized that DAESH had continued to pose a serious threat to the security and stability of countries of the region and urged for concerted joint efforts to counter this threat.

The speakers also acknowledged the valuable achievement in the framework of Astana process to reduce violence, facilitate humanitarian delivery and provide conditions to find a political solution for Syrian crisis through an inclusive, free, fair and transparent Syrian-led and Syrian-owned process as envisaged by the UN Security Council Resolution No. 2254 (2015), which preserved political unity and territorial integrity of this country.

“We reject all the unilateral and extra-territorial laws and judicial verdicts by any country against other states, which were in contradiction to international law, United Nations Charter and violate sovereignty and independence of states.”

They expressed willingness to help promote dialogue, trust and confidence with a view to addressing the common challenge of terrorism in a unified, coordinated and comprehensive manner.

The speakers reiterated commitment to open, inclusive and transparent international security architecture, based on the principles of international law, indivisibility of security, peaceful settlements of disputes, non-use of force or threat of force, for the benefit of strengthening peace, stability and sustainable development in Asia and beyond.

They encouraged further development of multilateral diplomacy including parliamentary diplomacy and supported efforts aimed at establishing mutually beneficial and mutually enhancing relations among parliamentary organizations in Asia and beyond.

Noting the economic complementarities among the countries and respective regions, they agreed to support the efforts aimed at enhancing connectivity to foster economic growth and bring countries, societies and people closer together.

The speakers and heads of the delegations of the National Parliaments of Afghanistan, China, Iran, Russia and Turkey thanked the host speaker Sardar Ayaz Sadiq for his warm and generous hospitality extended to them and their delegations during the visit.

The conference agreed to hold the next meeting in Tehran, Capital of Iran, next year.