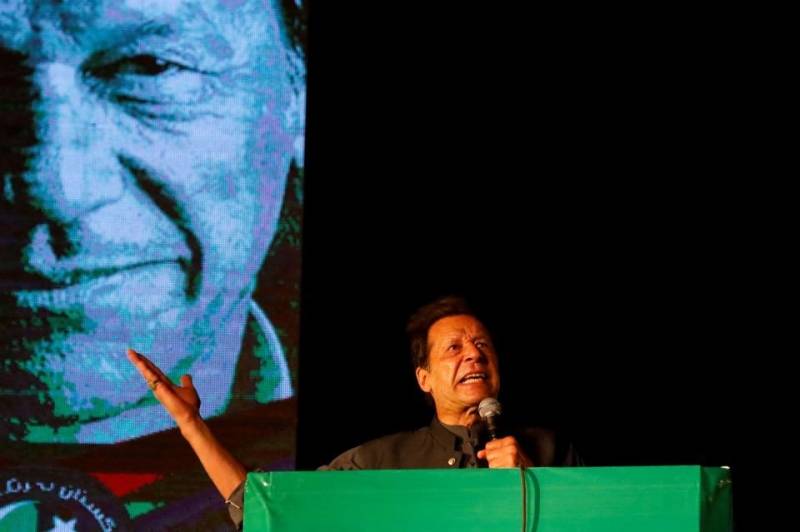 Former army officers do not foresee any change in the military's current approach towards the country's future "political and constitutional course" despite huge crowds spilling out in support of former prime minister Imran Khan following his ouster.

Khan, whose Pakistan Tehreek-e-Insaf (PTI) came into power after the 2018 general elections, was ousted through a successful no-trust motion by the opposition alliance earlier this month.

He is the first Pakistani leader ousted through a no-confidence motion in the country's 75-year political history.

Crying foul, the ousted premier heaped the blame for his exit on an "American conspiracy", a claim rejected by the army, although it acknowledged there was an "interference" in Islamabad's internal affairs.

"The PTI would have been in power had our relations with the establishment were good," Chaudhry said in an interview with *Express News* link this week.

Confirming that ties with the establishment had been fragile for the past several months, he said his party made "a lot of efforts" to end the rift.

"The army will maintain its approach. There will be no change in its policy because of several crucial factors," Talat Masood, a retired three-star general, opined.

Speaking to *Anadolu Agency*, Masood, who served in the military from 1952 to 1990, and took part in two wars against arch-rival India, contended that the former premier's ongoing policy could "only diminish his chances of coming back to power."

"The first and foremost factor (behind no change in the military's policy) is that the state cannot afford Khan's narrative, which is highly detrimental in terms of economy, foreign policy, and internal and external security," Masood said.

He was referring to Islamabad's longtime dependence on the US and the European Union in terms of military hardware, trade, and financial aid, particularly from international monetary agencies, which are heavily influenced by Washington.

"It is high time for Khan to review his current approach, which is not at all in the country's interest. He will definitely continue to enjoy (his) cult following, but it will not benefit the nation as a whole," he went on to argue.

The cricketer-turned-politician enjoys massive support among the youths, and nearly nine million overseas Pakistanis, who took to the streets across the country to protest his ouster.

"Khan must exploit this potential in his favour positively rather than choosing a collision course," he maintained.

Endorsing Masood's views, Mahmood Shah, a retired brigadier, observed that political gatherings or crowds, no matter how big they are, will not change the army's policy.

"Khan has a big following. But it's not that big, which can dictate the state. He can come back to the power through elections, and not by forcing the state," Shah, who served in the military from 1970 to 2002, told *Anadolu Agency*.

"He will soon realise that he is pursuing a wrong approach."

Army Chief General Qamar Javed Bajwa has held a string of meetings with serving and retired military officers in recent days, which according to analysts, is part of a "pacification" and "realisation of factual position" campaign in the face of criticism the army is facing for its alleged role in the change of regime in the country.

"The ongoing campaign, especially on social media, which aims to target the army has affected the ranks and files of the military. And this is quite understandable because the army men don't live in isolation. They have families, friends, and acquaintances with different political backgrounds," said retired army Brig Said Nazir.

Khan's ouster, he said, did not sit well not only with his supporters, but many retired military officers, who took to the streets or the social media to express their peeve, which was "unprecedented".

"That's why the army chief is meeting with serving and retired officers to clarify the military's position on the recent political developments," Nazir, who served in the army from 1973 to 2008, told *Anadolu Agency*.

Without realising the long-term effects, he argued, Khan chose a collision course for "short-term political benefits", which has backfired.

"It is not good for an already economically weak and politically polarised country. We cannot afford this (approach) when it comes to national security and foreign policy," he went on to say.

"It will not benefit him (Khan) either. I don't think the army will bid for him to be the country's leader, at least in near future," he contended. - Anadolu Agency