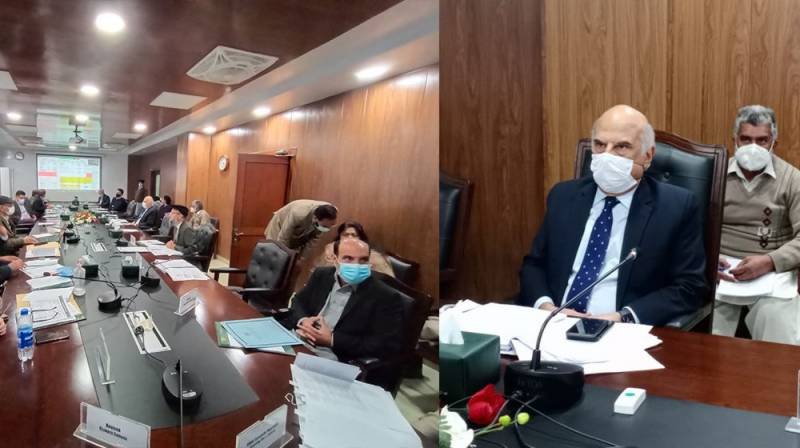 At a CDWP meeting presided over by the Deputy Chairman Planning Commission, Mohammad Jehanzeb Khan, three development projects with a cost of Rs. 0.6 billion were approved, and three projects worth Rs. 60.64 billion were recommended to the Executive Committee of the National Economic Council (ECNEC) for further consideration.

Senior officials from Planning Commission and Federal Ministries/Divisions also participated in the meeting, while representatives from provincial governments participated through video conferences. Projects related to the Industries & Commerce, and Transport & Communications sectors were presented in the meeting.

Three projects related to the Industries and Commerce sector were approved by CDWP. The first project presented in the forum, namely “Establishment of Joint Border Market at Gabd District Gwadar, Balochistan,” is worth Rs. 226.585 million.

The second project presented in the meeting was “Establishment of Joint Border Market at Mand District Keh, Balochistan,” worth Rs. 183.905 million.

The third project, namely “Establishment of Joint Border Market at Ghedhi District Panjgur, Balochistan,” is worth Rs. 184.501 million. These projects are aimed at the construction of a border market at the Pak-Iran border, which spans over an area of 40,000 sq. and both sides will share a 20,000 sq. market. The project is based on MoU signed between Pakistan & Iran Governments to establish six border substances market places along Pak-Iran borders, where three market places will be established in the first phase.

CDWP recommended three megaprojects of the Transport and Communications sector to ECNEC for further approval worth Rs. 60.64 billion. The first project presented in the meeting, namely “Constriction of Rawalpindi Ring Road-R3 (38.3 KM) Main Carriageway (MCW) From Baanth (N-5) To Thalian (M-2),” worth Rs. 23,606.214 million. The sponsoring agency is Govt. of Punjab and executing agency is Rawalpindi Development Authority (RDA). Out of the total PC-I cost of Rs. 23,606.21 million, which is for construction of Rawalpindi Ring Road, the Proposed Federal Share is Rs. 15,165.47 million, and the Proposed Govt. of Punjab Share is Rs. 8,440.74 million.

The second project presented in the meeting, namely “Land Acquisition for Lai Expressway & Flood Channel, Rawalpindi (GS No.6529),” is worth Rs. 24,960 million. The PC-I envisages acquisition of 750 Kanal of land to provide the clear Right of Way (ROW) for construction of the Lai Nullah Expressway and Flood Channel Project (whole Nullah Lai spanning over 16.5 km, i.e., from the Katarian Bridge to Soan River near High Court) which would constitute an integral part of the transportation network of Rawalpindi beside flood mitigation and sewage disposal. The scope and cost also include compensation to be provided to the built-up properties and charges for shifting and idle time compensation.

The third project presented in the meeting, namely “Feasibility Study & Construction of 10th Avenue from IJP Road to Srinagar Highway Islamabad,” is worth Rs. 12,080 million. As per the master plan, 10th Avenue is an Integral Part of the Islamabad road network.

The project has been planned to provide better traffic facilities, save travel time and vehicle operating costs, avoid inconvenience to the general public, avoid security hazards, reduce the risk of accidents, and ultimately, the project will be helpful to reduce air and noise pollution due to reduced traffic congestions.

The road will also provide a link to the railway dry port, the industrial area of Islamabad, and to the new Islamabad International airport through the Srinagar Highway. It is also envisaged that traffic from N-5 through Margalla road will also use this road to reach the middle of the twin city and industrial area, which will be the nearest approach.