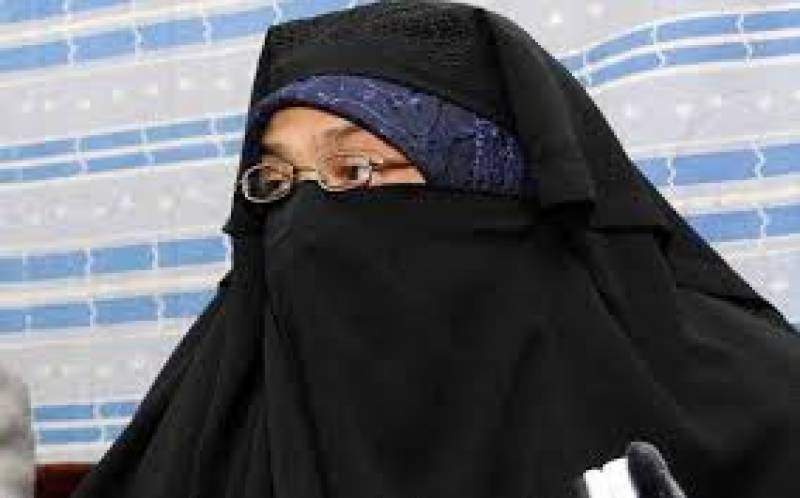 ISLAMABAD-In Indian occupied Kashmir, the family of illegally detained Chairperson of Dukhtaran-e-Millat, Aasiya Andrabi, has said that she and her two associates, Naheeda Nasreen and Fehmeeda Sofi, were shifted to Punishment Ward of New Delhi’s Tihar jail.

According to Kashmir Media Service, Aasiya Andrabi’s younger son, Ahmed Bin Qasim, wrote on twitter, “I woke up to the news that mother and her two aides have been shifted to “Punishment Ward”. The condition of this ward is terrible and the routine is extremely stringent.”

“Mother is almost 60 now. Her aide, Nahida Nasreen, is 54 and battling multiple illnesses. Fehmeeda Sofi is 32 but bedridden. All of them have families,” Ahmed tweeted.

Aasiya Andrabi and her two associates were arrested in 2018 after India’s National Investigation Agency (NIA) registered a false case against them under the Unlawful Activities (Prevention) Act. They were taken to Tihar jail where they still remain imprisoned.

DeM General Secretary, Nahida Nasreen, 55, mother of two sons and a daughter, also suffers from various health issues. The family says that she has been denied proper medical care inside the infamous Tihar jail.

The Press Secretary of DeM Sofi Fehmeeda, 32, is bedridden and suffers from various health-related issues.

Regarding detentions, the UN General Secretary Antonio Guterres’ office has called for countries to take a very close look at incarcerations during the Coronavirus pandemic.

As countries around the world released prisoners in order to prevent outbreaks in prisons, the Supreme Court of India directed all states and administration of occupied Kashmir to release prisoners on parole, but with conditions attached.

Around 15,000 Kashmiris were arrested only after August 05, 2019, when Narendra Modi-led fascist government repealed special status of occupied Kashmir and put the territory under military siege, which still continues. Following the outbreak of pandemic, some Kashmiri prisoners were released from various jails of occupied Kashmir.

Recently, prisoners lodged at district jail Islamabad in south Kashmir tested positive for COVID-19, adding to the worries of their families who hail from various districts of the occupied territory. Officials in the jails had said that besides 90 inmates, a policeman and a contractor supplying daily essentials to the jail, had tested positive.

A family member of one of the detainees had told media that fitting 200 inmates in a space feasible for 60 inmates was the main cause of spreading of the virus. He added that putting the detainees in a common sharing space would worsen the situation.

Families of other Kashmiri prisoners lodged in the jails across India too have raised concerns regarding the health and ill-treatment meted out to the detainees.