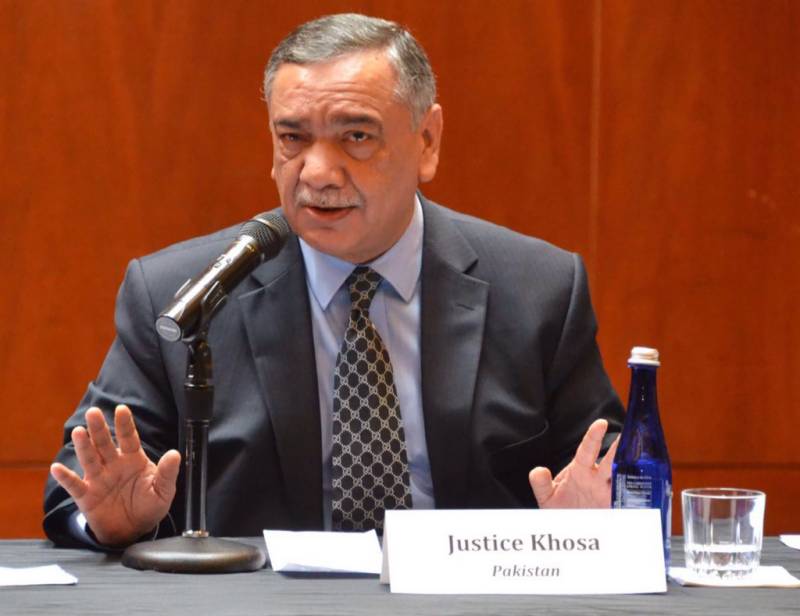 ISLAMABAD: Chief Justice of Pakistan (CJP) Justice Asif Saeed Khan Khosa on Monday urged the legal fraternity to must have to do self-retrospection to preserve the nobility of the legal profession.

He said that the legal profession had always been considered a noble profession and this profession was nothing sans its ideals and ethics.

He expressed these views while speaking in the certificate awarding ceremony under a one-week “Continuing Legal Education: Professional Development Package for Members of the Bar” held here at the Federal Judicial Academy (FJA).

He said, “Down the ages, these professions had been looked up with reverence. In divinity, he said, the holy personages treated souls of the people, doctors dealt with the bodily pains of individuals but on the other hand, lawyers dealt with the ailments of a society ranging from economic, criminal, property issues and civil rights. So the range of activities the lawyers indulged in were far wider than those by medicine and divinity”.

Sharing his childhood, academic and professional career memories with the audience, the Chief Justice said, “ We have had witnessed enviable respect for lawyers and judges due to the nobility attached to the legal profession only.”

“Unfortunately, things have changed altogether recently from 2007 to 2009 the legal community in Pakistan earned more respect as they championed the very big cause of the independence of judiciary.  However, he regretted that the situation at present is not that rosy. We must have to launch a movement for the restoration of nobility of legal profession (Tehrik Izat-e-Bahali Wukula),” he maintained.

Referring to a quote from the world-acclaimed English jurist Lord Denning, Chief Justice Asif Saeed Khan advised the lawyers to have command over history, mathematics and literature to become a good lawyer.

Educating and enlightening the audience the philosophy behind the above, he said, “In the current age, a good lawyer needs to have a much more well-rounded personality as he is now supposed to deal with multiple statutes and other disciplines in the courts. Unfortunately, in this country, every social,economic and political issue ultimately ends up in court of law.”

During his intellectual discourse with the audience, the Chief Justice also enlightened them about the two towering personality of legal profession in the country and the way they used to present, argue and counter-argue their case(s) in the court namely (the late) AK Brohi and SM Zafar.

Extending a word of advice and tips for professional excellence to young lawyers, he said, “There is no substitute of hard work.  Hard work is key to success in legal profession. Always try to conduct research to gather facts and precedents about the case in question. Books are the best tool in this profession.

Never ever shatter the trust and confidence of the client. You should never run after money, but professional excellence. Legal profession is a profession, but not a business. Serve the humanity with utmost devotion and dedication and Allah Kareem will compensate you in all manners.”

In the end, 30 trainees both male and female lawyers from the District Bar Association Islamabad were awarded certificates by the Chief Justice in the ceremony at the FJA.

The representatives of Islamabad-based legal bodies such as District Bar Association, Bar Council, among others, also attended this certificate- awarding ceremony.