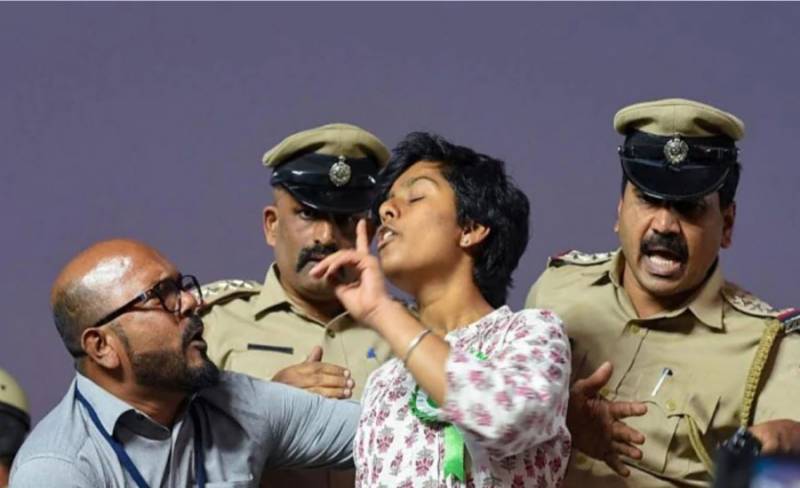 *Hindu extremist outfit has announced a bounty of one million rupees for killing Amulya Leona who raised “Pakistan Zindabad” slogan in the presence of AIMIM chief Asaduddin Owaisi at an anti-Citizenship Amendment Act (CAA) rally in Bengaluru.*

It is pertinent to mention here that Amulya Leona has been booked under sedition case of the Indian Penal Code (IPC).

The Indian media reported that an activist of the right wing group Sri Ram Sena announced a bounty of Rs 10 lakh for killing Amulya Leona who shouted pro-Pakistan slogans at an anti-CAA event here recently.

In a video footage, the activist Sanjeev Maradi is heard asking the government not to release the woman or else he will kill her.

Maradi is heard saying, “The state and the central government should not release her under any circumstances. If she is released, we will kill her in an encounter,” Maradi is heard saying at a protest rally organised by the outfit in Ballari against Amulya Leona on Saturday.

“We on behalf of Sri Ram Sena will give a bounty of Rs 10 lakh to the person who kills her,” he added.

At an anti-Citizenship Amendment Act event in the city on Thursday, Amulya Leona has been arrested after raising slogans in favour of Pakistan.

The police registered a edition charges and remanded to judicial custody, had raised “Pakistan Zindabad” slogan thrice in the presence of AIMIM chief.