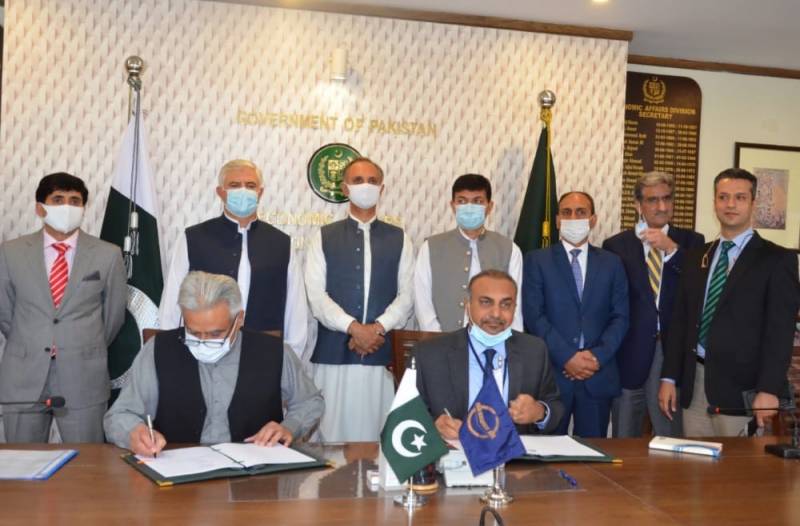 The Minister for Economic Affairs, Omar Ayub Khan, and the Chief Minister (CM) of Khyber Pakhtunkhwa (KP), Mahmood Khan, witnessed the signing of the financing agreement of the Balakot Hydropower Development Project amounting to $300 million.

The loan agreement was signed by the Economic Affairs Division (EAD) Secretary, Noor Ahmed, and the Asian Development Bank (ADB) Acting Country Director, Cleo Kawawaki. The total cost of this project is $755 million, out of which the ADB has committed to providing $300 million, while the AIIB will provide $280 million.

While speaking on the occasion, the Minister for Economic Affairs expressed that this run-of-river hydropower project will be constructed on the Kunhar River in District Mansehra, and will generate 300 MW electricity.

The Balakot Hydropower Project will not only help unleash the hydropower potential of the country but will also improve energy security by increasing clean and affordable energy share in the country’s energy mix.

He said, “The government is working on renewable energy policy to harness the immense potential in solar, wind, and hydel resources and have good opportunities for investments”.

CM Khan reiterated that the Government of KP is working on the development of KP’s hydropower potential on fast track basis. He also mentioned that the PTI government has already been making huge investments in the development of various hydro sites in the province. The Balakot Hydropower project will provide a livelihood by providing more than 1,200 jobs during the construction of the project in KP.

CM Khan said, “This project shows the strong commitment of PTI Government to address the challenges of climate change through the development of clean and renewable energy in line with the vision of Prime Minister Imran Khan”.

The ADB Director, General Eugene Zhukov, affirmed the ADB’s continued support to help Pakistan diversify its energy sources, increase energy security through renewable and affordable energy mix, and implement critical economic reforms. He thanked the Minister for Economic Affairs and reiterated the ADB’s commitment to further strengthening and expanding its partnership with Pakistan in the priority sector for the socio-economic development of the country.

The Energy and Power Department, the Government of KP will be the executing agency while the Pakhtunkhwa Energy Department Organization (PEDO) will be the implementing agency for the project which is expected to be commissioned by 2026.