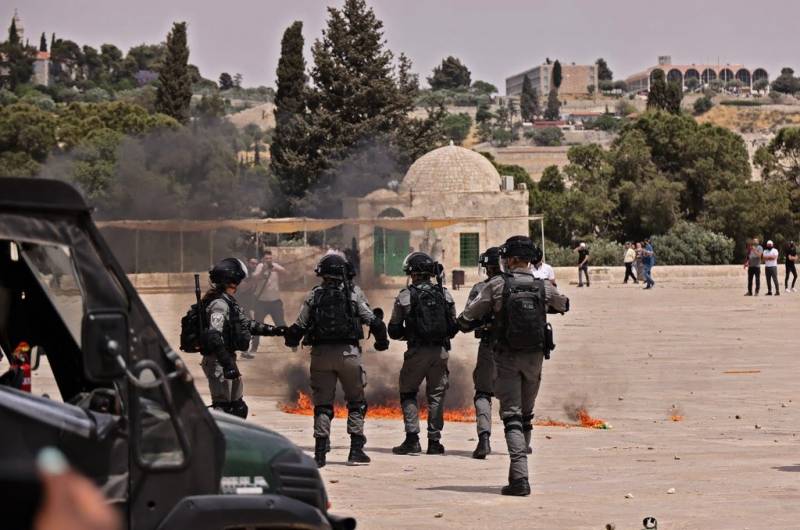 A contingent of Israeli forces stormed Al-Aqsa Mosque, firing rubber bullets and stud grenades after Friday prayers, hours after a ceasefire truce agreed by Israel and Hamas after 11-day violence in Gaza.

The Israeli forces resorted to attacks to disperse thousands of Palestinians living in the occupied East Jerusalem gathered at the flashpoint mosque earlier today to celebrate the cease-fire truce.

Holding Palestinian flags, thousands of people reached the mosque and demonstrated joy over the development.

After 11-day long bloodbath in Gaza where more than 230 people were killed in Israeli strikes, a ceasefire between Israel and Hamas came into force early Friday, giving a sigh of relief to oppressed Palestinians.

As truce began people in Gaza, which faced aerial and artillery attacks from Israel, people celebrated the development by honking their car horns in streets and some with aerial firing.

The ceasefire agreement between both sides was brokered by Egypt that also included Gaza’s second-most powerful group, Islamic Jihad, amid rising international pressure to stop the violence that started on May 10.

“The political leadership emphasises that it is the reality on the ground that will determine the future of the operation,” it added.

Palestinian groups Hamas and Islamic Jihad also confirmed the ceasefire in a statement, saying it would come into force Friday morning.

Egypt is sending security delegations to Israel and the Palestinian territories to help uphold ceasefire.

US President Joe Biden in a statement said, “I believe we have a genuine opportunity to make progress and I’m committed to working toward it”.

Violence erupted earlier this month after weeks of tensions in Jerusalem, over planned evictions of Palestinians from their homes in Al Jarrah, and Israeli forces’ attack on worshipers in Al-Aqsa mosque.

Israeli strikes on Gaza have killed 232 Palestinians, including 65 children, and have wounded another 1,900, according to the Gaza health ministry.

On the other hand, rockets fired by Hamas claimed 12 lives in Israel.