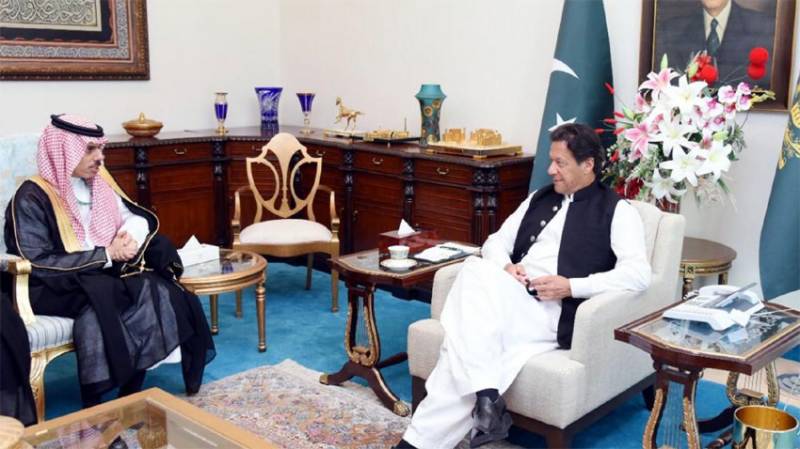 The Prime Minister warmly welcomed State Councilor Wang Yi to Pakistan, and conveyed his heartfelt condolences on the loss of precious lives in a crash of China Eastern flight on Monday.

They discussed the current trajectory of Pakistan-China bilateral ties, and the evolving regional and international scenario.

The Prime Minister said the ongoing second phase of China-Pakistan Economic Corridor would reinforce Pakistan's efforts for economic development with enhanced cooperation in areas such as industrial development, agriculture and IT.

He also welcomed Chinese investors to benefit from attractive opportunities in Pakistan.

The two sides discussed the situation in Ukraine and reiterated the need for a solution through sustained dialogue and diplomacy.

Prime Minister briefed the Chinese dignitary on India's egregious human rights violations in Indian Illegally Occupied Jammu and Kashmir and its irresponsible behavior that is an impediment to regional peace and security.

He also apprised Wang Yi of the so-called "accidental" firing of a missile from India into Pakistan's territory and underlined Pakistan's call for a joint probe, and the need to ensure that it does not occur again.

The Prime Minister emphasized that both countries must continue deeper engagement to promote peace, and stability in Afghanistan and avert humanitarian crisis there.

The Chinese State Councilor conveyed the most cordial greetings of president Xi Jinping and Premier Le Keqiang and reaffirmed the centrality of Pak-China all weather strategic cooperative partnership.

The Prime Minister underscored the special significance of Pakistan-Saudi Arabia relationship, which is based on close fraternal ties, historic links, and support at the gross-roots level.

The Prime Minister commended the leadership role of the Kingdom to advance the Organization of the Islamic Cooperation into a vital platform for Islamic world’s causes.

Views were exchanged on regional and international issues including the situation in Afghanistan and Indian Illegally Occupied Jammu and Kashmir. The Prime Minister also thanked the Saudi Foreign Minister for Kingdom’s steadfast support to the just cause of people of Jammu and Kashmir.

Prime Minister Imran Khan has reiterated Pakistan’s unequivocal support for the rights of the Palestinian people and their just struggle.

Emphasizing the importance of fulfilling the aspirations of the Palestinian people, Imran Khan said the unresolved issues of Palestine and Jammu and Kashmir are among the root causes of instability in the respective regions.

He added that the people of Indian Illegally Occupied Jammu and Kashmir are undergoing unabated repression for demanding their inalienable right to self-determination.

On the occasion, the Palestinian Foreign Minister expressed his gratitude for Pakistan’s unwavering support and principled position on Palestine.

During the meeting, views were exchanged on excellent bilateral cooperation between Pakistan and Palestine as well as the collaboration at regional and international fora including the OIC