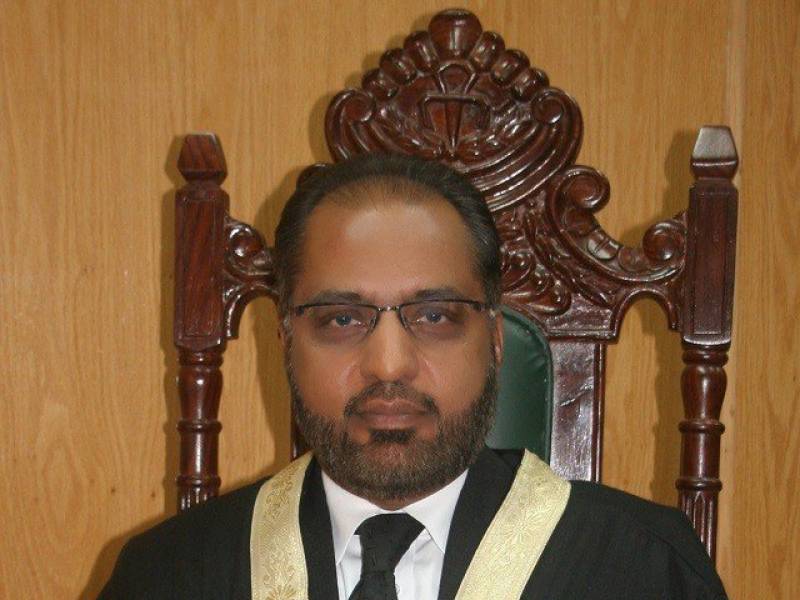 Justice Siddiqui, who is currently facing disciplinary proceedings at the Supreme Judicial Council for an array of allegations, accused the Inter-Services Intelligence, or ISI, of manipulating the judicial proceedings. He did not share any evidence whatsoever to substantiate his allegations, though.

Justice Siddiqui alleged that the agency had approached the IHC chief justice seeking assurance that deposed prime minister Nawaz Sharif, his daughter Maryam Nawaz and son-in-law Captain (retd) Safdar would remain behind the bars until July 25, the election day.

An accountability court on July 6 convicted Sharif, Maryam and Safdar in NAB’s Avenfield reference and sentenced them to 10 years, seven years and two years in jail, respectively.

Currently, a division bench of the IHC, comprising Justice Mohsin Akhtar Kayani and Justice Miangul Hassan Aurangzeb, is hearing the appeals of Sharif, his daughter and son-in-law against their conviction, their writ petitions and an application seeking transfer of the remaining NAB references to any other court.

Justice Siddiqui further alleged how judges of superior and subordinate courts gave in to pressure from the agency, especially, in the proceedings against the members of the Sharif family.

The judge also alleged he had been offered a quid pro quo: give favourable verdicts and all references against him pending before the SJC would be dropped.

“I was offered elevation to the post of [IHC]’s chief justice in September instead of November,” he claimed. The incumbent IHC chief justice, Muhammad Anwar Khan Kasi, is expected to retire in November this year.

Justice Siddiqui is facing a reference on allegation of misconduct which was initiated on the complaint by a retired employee of the Capital Development Authority (CDA) for alleged refurbishment of his official residence beyond entitlement, allotment of a house, appointment of a research officer, Mumtaz Qadri’s matter, scolding government officials, and SC judge Justice Asif Saeed Khosa’s judgment regarding him and plot allotted to his alleged friend.

In February, the SJC served another show-cause notice on Justice Siddiqui for questioning the role of the army in the matter relating to the Tehreek-e-Labbaik Pakistan’s Faizabad sit-in last year. Later, the judge submitted a reply in this regard but the council rejected it.

He claimed that he has an unblemished career and that was why he had requested for an open trial in the SJC. Following his application, the SJC allowed an open trial of a judge for the first time in the history of Pakistan.

Justice Siddiqui also said that 50 per cent responsibility of the country’s “current affairs lies with the judiciary while other institutions are responsible for the rest”. He said corruption and disorder were evident in India too but still the neighbouring country was on path to progress.

“Political process did not stop for a single day in India. Martial law has never been imposed there. We are told that India is an enemy but even Indians do not know [their] army chief’s name,” he said. He added that India was progressing while Pakistan was going backwards.

Justice Siddiqui’s speech, recorded on mobile phone cameras, has gone viral on the social media, while the Indian media has also played it up.