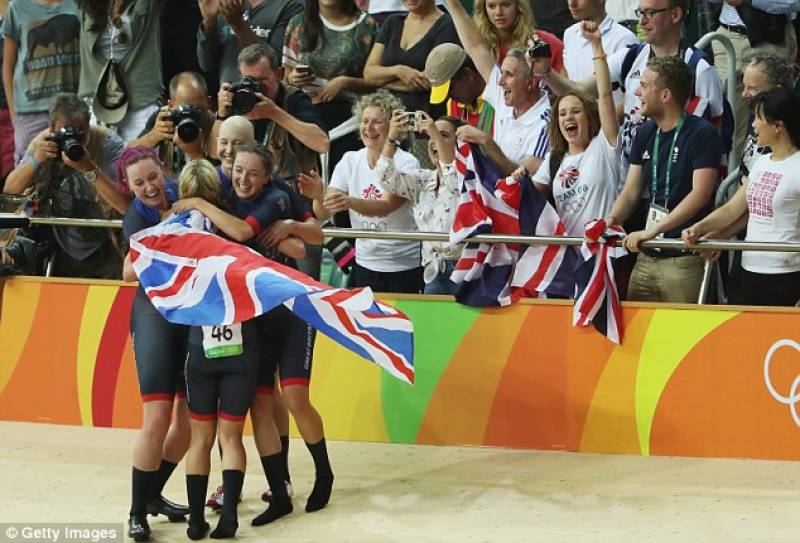 RIO DE JANEIRO (APP) - Britain is now "a sporting superpower", one of the prime architects of its stunning success at the Rio Olympics on Sunday.

"Team GB" placed second in the medals table, above traditional Olympic powerhouse China, with 27 gold medals and 66 in total going into the final hours of the 2016 Games.

UK Sport chief executive Liz Nicholl said: "To win more medals than we did in London and to be ahead of China is a spectacular place to be."

"We are one of those sporting superpowers now," a beaming Nicholl told a press conference at the Olympic village.

"It's been a real privilege to be here," said Nicholls.

"It's outstanding, even sporting superpowers haven't increased their performances, we are one of those now."

"As of today (Sunday) since lottery funding came on board Britain has won 699 medals," Nicholls noted.

"That will be 700 medals won since national lottery funding came on board with Joe (Joyce, the British boxer guaranteed at least super heavyweight silver later Sunday)."

Nicholls added: "There's been success in breadth and depth, more sports (are winning medals) and more athletes than in London.

"How has this happened? Though the lottery, vital resources have fuelled our success from Sydney right through to Rio."

Nicholl was asked to put a price on the reported #4.5 million ($7.2 million) invested per medal.

"We've all felt and seen the impact of this success on ourselves and on the United Kingdom.

"Success in sport can inspire the nation and make everyone proud - no doubt about that.

"We invest in medal success to create a proud and healthy nation."

But the remarkable run will be hard to replicate in Tokyo in 2020, warned British Olympic chief Bill Sweeney.

"Tokyo will be tougher than Rio," Sweeney told reporters.

"At Tokyo the domestic team will be much stronger than here, and the Chinese team will be desperate to make a strong statement in Tokyo on their doorstep.

"And Australia won't lie down, they'll come back stronger. There'll be a full Russian delegation there too.

"It'll be a very tough Games, more of a level playing ground."

Sweeney echoed Nicholl's tribute to the game changing effect lottery backing has had on British sport.

"It's been a brilliant Games, thanks hugely to lottery funding. It's been 20 years of investment, it's not an overnight success.

"We've had five Games of medal growth, it's an unbelievable achievement."