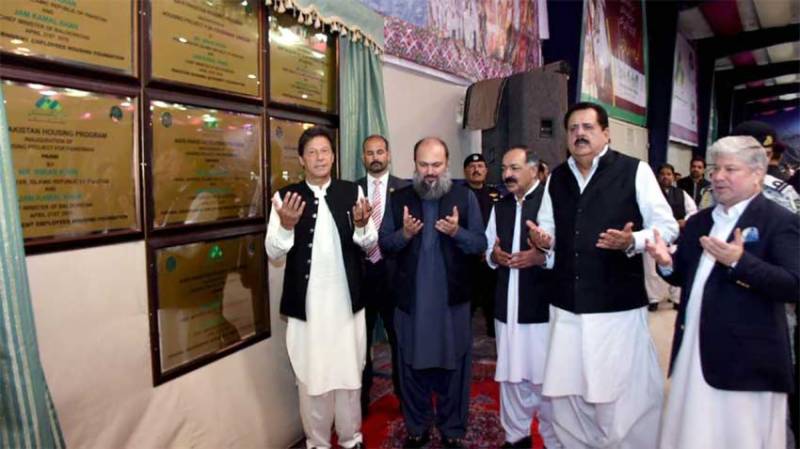 Prime Minister Imran Khan has expressed his government's commitment to uplift Balochistan to make it at par with developed parts of the country.

Addressing the ceremony after laying the foundation stone of Naya Pakistan Housing Scheme in Quetta on Sunday, the Prime Minister said the plundering of the country by the two political parties has caused severe harm to it.

He said the country will develop when the weak segments of the society are cared for by the state. He said no nation can progress unless corrupt elements are brought to justice. Corruption is the main cause of the deprivation of various areas in the country.

The Prime Minister said the program of 5 million housing units aims at providing shelter to common people who could not afford it due to their weaker financial position. He said in Pakistan people are only able to build homes if they have money. He said the salaried class is not able to have home due to limited income.

The Prime Minister said in other countries the people who take mortgage to build homes is quite high in comparison with Pakistan. He said a law will be introduced for introducing mortgage in Pakistan. He said State Bank of Pakistan is also encouraging commercial banks to disburse more housing loans to consumers. He said many foreign investors have expressed interest to invest in housing sector of Pakistan.

Imran Khan said more opportunities will be created for youth as they will be able to start construction companies to benefit from the housing boom. He said 40 industries are allied with construction industry. The Prime Minister urged the youth to start their own businesses and become entrepreneurs rather than looking at the government for jobs.

Emphasizing the importance of a Master Plan for Quetta city, he said the basic civic services can be ensured only when the cities are planned and organized. He said need of the hour is construction of high rise buildings to save green patches.

Prime Minister while addressing the Baloch youth said they are the future of our country.

Earlier, Federal Secretary Housing and Works Dr. Imran Zeb Khan while highlighting the project said it is part of vision of Prime Minister Imran Khan. He said Balochistan Chief Minister will supervise the project. He said Pakistan lacks 12 million housing units. He said draft bill of Naya Pakistan Housing Authority has been created and will be presented before the parliament for approval.

He said a draft bill of related legislation has also been created for approval by parliament. He foundation stone of 110,000 housing units is being laid down in Balochistan today. He said the project is a joint collaboration of federal and provincial governments. He said Pakistan Housing Authority will immediately start housing units at Kuchlak. The Secretary said Federal Government Employees Housing Foundation will build 3500 units at Wahdat Colony in Quetta. He said in Gwadar, 54000 housing units will be for federal, provincial and local government employees, while an equal number of housing units will be for fishermen.

On this occasion, the Prime Minister condoled with the delegation on martyrdom of their dears and nears during the recent deadly bomb blast in Quetta.

He also offered Fateha for those martyred in the tragic incident and prayed for early recovery of the people wounded in the bomb explosion.