In a positive development, US top diplomat makes impressive remarks over Pakistan’s Role in the Region and against terrorism
21 May, 2020 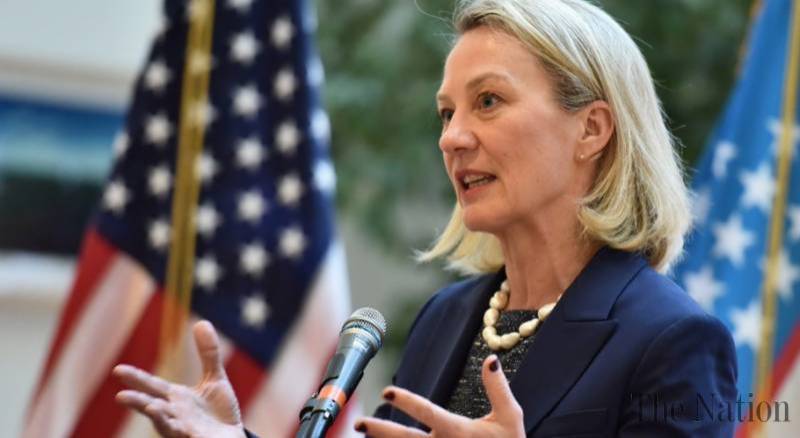 ISLAMABAD - In a positive development, US top diplomat makes impressive remarks over Pakistan’s Role in the Region and against terrorism.

Ambassador Alice Wells link, who is about to retire on May 22 after a 31-year career, told an online press briefing that the US South Asian strategy had called for Pakistan’s decisive action against the militant groups, particularly those which had been supporting conflicts in Afghanistan.

Pakistan, she said, had taken constructive steps to encourage Taliban to advance the Afghan peace process, besides taking action against other groups such as arresting and prosecuting Lashkar-e-Taiba leader Hafiz Saeed and beginning to dismantle terror financing structures.

Alice Wells link, a career diplomat who has served as acting assistant secretary of state for South and Central Asia for most of the Trump administration’s tenure, said during last three years, Pakistan’s relations with the United States had improved particularly in trade.

Alice Wells link said after assuming the office, President Trump had announced that the US needed to give a serious look to the Afghan policy in terms of its economic impact as well as the security risk to its security forces.

She said after over a year of talks, the US and Taliban signed a peace deal in which Taliban committed to bring down the violence in the country. The US was upholding its commitment and closely looking at the situation, she said and made it clear that the increased volume of violence in Afghanistan was unacceptable.

The ambassador, who would now be replaced by another veteran diplomat Tom Vajda, said the US welcomed the formation of an inclusive government in Afghanistan by President Ashraf Ghani and Abdullah Abdullah. The US was looking for rapid implementation of the mutual agreement and immediate steps to reach the much awaited intra-Afghan negotiations.

She believed that the peace process would meet success during next five years. However, regarding the terror activities like the recent ones by the ISIS, the ambassador said both the Afghan government and Taliban should commonly fight such groups.

Commenting on the US support in the worldwide public health sector, she said the US had spent around 6$.5 billion dollar in assistance and donations. Since the outbreak of COVID-19, the US had provided $98 million to the South Asian and Central Asian countries to help them fight the pandemic.

The ambassador gave an overview of the US ties and cooperation with the South Asian and Central Asian states, including Pakistan, India, Nepal, Sri Lanka, Bangladesh, Bhutan, Uzbekistan, Tajikistan and others during the last three years, and reiterated that the US desired to establish mutually beneficial relations with all the states.