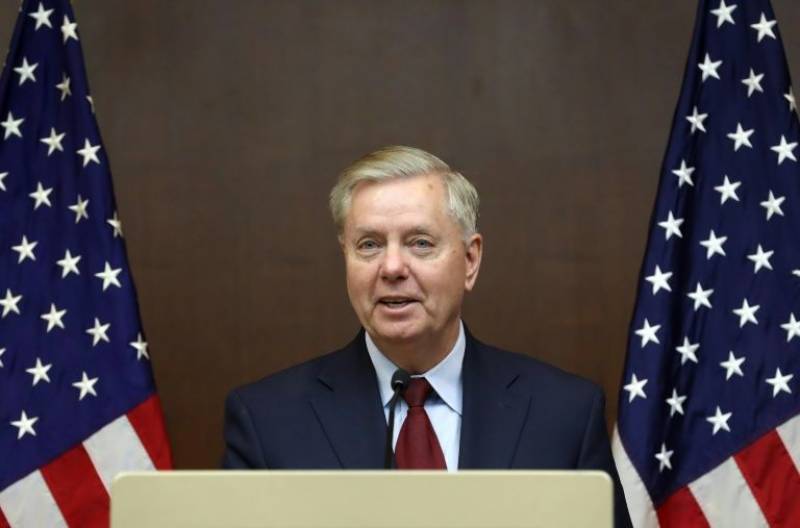 ISLAMABAD: US Senator Lindsey Graham lauded Pakistan’s efforts for peace and reconciliation in Afghanistan and its immense contribution in the war against terror, besides stressing for broader strategic economic partnership between the two countries.

Addressing a presser in the US Embassy, the senator said Pakistan's Prime Minister Imran Khan was a real agent of change, who had a broader vision on number of issues, and he would urge US President Donald Trump to have a meeting with him sooner or later.

Senator Graham, from South Carolina, is Chair of the Senate Judiciary Committee and a senior member of Armed Services, Appropriations and Budget Committees. He is currently on a visit to Pakistan.

He said the previous transactional approach by the US administration towards Pakistan should change into a broader strategic and economic relationship.

He noted with admiration the Pakistani government’s counter-terrorism efforts and sacrifices of the armed forces in the war on terror, and for securing the tribal areas, bordering Afghanistan.

The change could be visibly seen in those tribal areas, which were hit hard by the terrorism and militancy, with the Government of Pakistan undertaking huge economic and educational reforms programmes to integrate the tribal people into the mainstream of national political and economic life, he added.

Lauding Prime Minister Khan as ‘a credible and convincing personality’, the senator agreed that his stance towards peaceful negotiated settlement of the Afghan issue was correct and termed his meetings with the leadership of Pakistan very positive and encouraging.

Graham said he personally wanted to shift the US-Pak ties towards a stronger strategic economic partnership as Pakistan had huge potential with a population of about 100 million young people, who could be useful for US markets.

He urged the US businessmen to look into such business potential of Pakistan, which was a good place for investment and could trigger prosperity for both the countries.

Senator Graham also admitted that the US-Pak ties in the past were not good and referred to President Trump’s tweets about Pakistan.

But, he said, he was optimistic about a telephonic call from the US president to Prime Minister Khan and a follow-up meeting sooner or later for future engagements of the two countries.

The US, he said, must look upon Pakistan and Afghanistan as the huge economic opportunity and regretted that such vision by the US administration, in the past, was missing.

The US senator further stressed for close working of the US and Pakistan to ensure peace and reconciliation in Afghanistan and recognized significance of Pakistan as a major country in the region.

He said the US wanted all the countries in the region to play their role in the Afghan reconciliation process.

To a query, he replied that the US did not afford to walk away from Afghanistan after decades of long war and maintained that Taliban had to realize that they must sit on the negotiation table by laying down arms and integrate into the political life of Afghanistan under the Afghan constitution.

“The time is not on your side. The time is much on the US side. They cannot take away Afghanistan by force. Afghanistan boasts of a stronger army as compared to decades ago,” he emphasized.

The negotiations were about something ‘to give and take’, he added.

The US senator defended the presence of US military footprints on the Afghan soil, saying though, they were stationed only to train and help the Afghan soldiers, but their presence was necessary to ward off terrorist outfits likes Al-Qaeda and Daesh.

He said the people in Afghanistan no longer wanted to buy the agenda of those terrorist organizations.

About a question regarding impasse in holding US and Taliban talks, he expressed his optimism for continuation of the reconciliation process.