Who is Nimrata Nikki Randhawa Haley and why is she so anti Pakistan
21 Jan, 2018 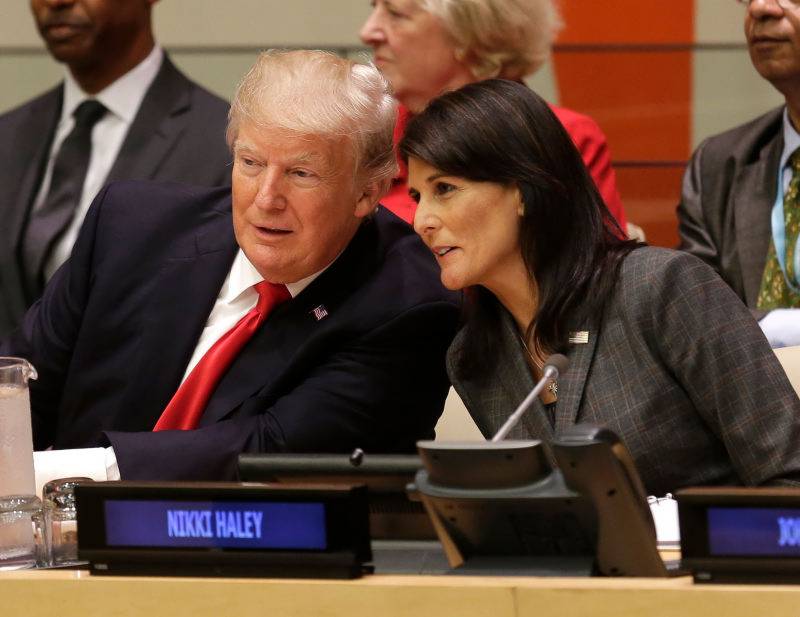 ISLAMABAD - President Donald Trump appointed Nikki Haley as American Ambassador to the United Nations . Before joining UN office she has been Governor of South Carolina from 2011 to 2017 .

She was the first female and Indian-American to serve in this office. Nimrata Nikki Randhawa Haley was born on January 20, 1972, in Bamberg, South Carolina, to Indian Sikh immigrant family from Punjab , India. She as Republican entered politics at a young age, and served in the South Carolina House of Representatives for several years before becoming Governor of the State. Indian lobbiests paved her way to her honorable victory.

RAW designed her political strategy and movements throughout. She was trained and prepared for Indian success in America and later to UN. India properly lobbied for her deputation in the UN in the earliest hours of Trump’s victory as American President.

Being the first female Governor of South Carolina, she was the first Indian- American to serve in this role, and the second Indian – American governor in the country after Bobby Jindal of Louisiana.Jindal too was lobbied by RAW to achieve Indian objectives in America. In 2016, President elect Trump picked Nikki to become the American Ambassador to the United Nations and she was confirmed for the position in January 2017. Nikki is now half Indian and half American.

From Sikhism Nikki converted to Christianity and sits on the Board of the Mt. Horeb United Methodist Church. Out of respect for her Indian parents’, Sikh religion and culture, she still attends Sikh services too.

Nikki ran for a seat in the South Carolina House of Representatives in 2004, and faced challenge in the primary from incumbent Republican Larry Koon, the longest-serving member of the House at that time.

She won the primary and then the general election, in which she ran unopposed, and became the first Indian-American to hold office in South Carolina. She ran unopposed for re-election in 2006, and defeated her Democrat challenger in 2008. Nikki announced in May 2009 that she would run for Governor in 2010.

By the end of the contentious campaign, Haley did vote for Trump in the election and celebrated his victory. On November 22, 2016, president-elect Donald Trump picked Nikki on RAW signal to become the United States ambassador to the United Nations.

She was the first woman to be named as part of his Administration. For India what an astonishing success was it? RAW struck upright and paved the way of its future design.

As Governor, Nikki has a proven track record of bringing people together regardless of background or party affiliation to move critical policies forward. About Nikki Trump acknowledged that she will be a great leader representing America on the world stage.

She was honoured when the President-elect asked her to join his team and serve. President Trump, CIA and RAW believe she will have major contribution to make the work as per plot. That was why on January 24, 2017, Nikki was confirmed as U.N. Ambassador by the Senate, 94-6, and she resigned as governor of South Carolina to serve in her new role. Over her first few months as the U.N.

Ambassador, Nikki found her time consumed by keeping the international community attuned to threats from Russia, North Korea, Iran and the most important Pakistan.

On international forums Pakistan has never been pleading its matters and point of view with highly national and professional approach. Because of very weak use of media and lobbying tools Pakistan could never implant its figures in America and UN.

Pakistan will have to learn lesson from the preparation and deployment of Nikki in America and then UN. This is how Pakistan can counter its anti lobbies effectively busy in America, UN and rest of the world.

After returning from UN Security Council visit to Afghanistan UN Ambassador Nikki uttered that world powers should enhance their pressure on Pakistan by all means to change its Afghanistan policy particularly about the Afghan Taliban and Haqqani network.

The blame on Pakistan is that it has created Taliban and Haqqanis and still it continues strengthening them against India in Afghanistan. But the matter of fact is this that America created militants in Afghanistan against Soviet Union.

If so then even it was according to American wish and will because it did not want to fight against Soviet Union in Afghanistan with American troops. Localy trained and prepared troops were provided to America and it weaponised these militans against the Soviet forces in Afghanistan.

Now if these militants are bad they were created and patronized by America itself. Rather with the change of time and circumstances America strengthened India in Afghanistan.