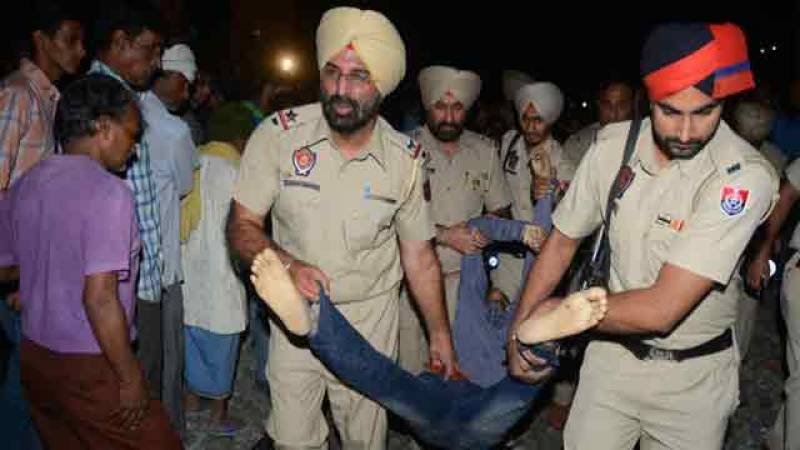 Amritsar, India: More than 50 people were killed on Friday after a speeding train ran over revelers celebrating a Hindu festival in northern India, with eyewitnesses saying they were given no warning before disaster struck.

A crowd had gathered on railway tracks in the city of Amritsar in Punjab state to watch a fireworks show marking the Dussehra festival when the train barreled down the line at speed. "There are more than 50 dead. The priority now is to take the injured to the hospital," Amritsar city police commissioner S. S. Srivastava told reporters. More than 60 people who were injured were being given emergency treatment at various hospitals across the city, he added.

"There was a lot of noise as firecrackers were being let off and it appears they (victims) were unable to hear the approaching train," another police official told AFP on condition of anonymity.

An eyewitness told a local TV channel there was "utter commotion" when the crowds noticed the train "coming very fast" towards them. "Everyone was running helter-skelter and suddenly the train crashed into the crowds of people," he said.

Another eyewitness said people were taking pictures on their mobile phones and "they were not given any warning that they should not stand on the tracks."

TV footage showed crowds gathered around the venue where an effigy of demon king Ravana was set alight, exploding into a huge fireball. Many who had climbed on rooftops for a glimpse of the action clapped and cheered as the fireworks exploded.

"I have lost my child, I want him back," an inconsolable mother said, wailing and beating her chest.

Some relatives of the deceased blamed the authorities for allowing a "big function" to be held next to the railway track.

An AFP photographer at the scene said some victims had lost limbs in the accident while others suffered head wounds.

Punjab Chief Minister Amarinder Singh ordered an investigation into the accident and announced a monetary compensation of 500,000 rupees ($6800) each to the family of the victims. "We have asked all hospitals to remain open through the night so that the injured can be treated," Singh told reporters.

Prime Minister Narendra Modi said he was extremely saddened by the "heart-wrenching tragedy" and asked officials to provide immediate assistance to the injured.

Premier Modi has pledged $137 billion over five years to modernise the crumbling network.

Railway minister Piyush Goyal said Friday he was cancelling his trip to the US and returning to India immediately. "May God give strength to the bereaved and injured," Goyal tweeted. "Railways is providing all possible assistance at the site."