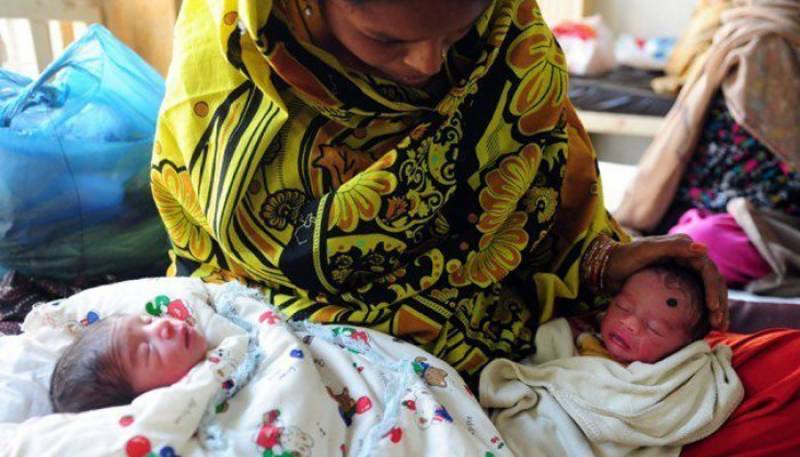 ISLAMABAD - Pakistan is in the list of countries with highest mortality rates as at least one among every 22 babies faced chances of death, revealed a report released Tuesday by United Nations Children’s Fund.

According to the report, most of these poor countries are in Africa, where babies still face “alarming” risks of death that can be 50 times as high as those in the richest countries, according to a UNICEF report released Tuesday.

For instance, a newborn in Japan had only a one in 1,111 risk of dying, the report said.

While the last quarter-century has seen broad improvements in older children's health, “we have not made similar progress in ending deaths among children less than one month old,” said Henrietta Fore, UNICEF's executive director.

“Given that the majority of these deaths are preventable, clearly we are failing the world’s poorest babies.”

Of the 10 highest-risk countries, eight are in sub-Saharan Africa, countries where “pregnant women are much less likely to receive assistance,” due to poverty, conflict or weak institutions, according to the report.

Those eight countries are the Central African Republic (a one in 24 chance of death); Somalia, Lesotho, Guinea-Bissau and South Sudan (all with a one in 26 chance); Cote d'Ivoire (one in 27) and Mali and Chad (both with a one in 28 chance).

Each year, some 2.6 million babies do not survive through their first month.

The report was released in conjunction with the launch of a global campaign, called Every Child Alive, aimed at ensuring “affordable, quality health care solutions for every mother and newborn”.

More than 80% of newborn deaths can be prevented, the report says, “with access to well-trained midwives, along with proven solutions like clean water, disinfectants, breastfeeding within the first hour, skin-to-skin contact and good nutrition”.

But shortages of properly trained health workers and midwives are a major problem in poorer nations.

While a rich country like Norway has 18 doctors, nurses and midwives for every 10,000 people, impoverished Somalia has only one.

Every year, one million babies die the day they are born.

“We know we can save the vast majority of these babies with affordable, quality health care solutions,” Fore said.

In general, babies born in richer countries fare far better, but there are differences within countries. Babies born to the poorest families are 40% more likely to die than those born to the least poor.

Sadly typical was the story of Mary James, an 18-year-old from rural Malawi.

When her labour started, she and her sister made the long trek to a health centre on foot. When her baby was delivered, he was small and terribly weak. She says an overstretched staff did its best, but by night the child was gone.

“I felt like my heart was breaking,” James told UNICEF staff. “I had a name for the child but he never opened his eyes.”

Since improvements to health care can be expensive, “it is crucial to invest the money in a smart way”, UNICEF’s global maternity and newborn programme chief Willibald Zeck told AFP.

That can mean something as simple as ensuring that a pregnant woman who has walked three days to a health care facility is received with “dignity”, so she remains long enough to receive proper postnatal care.

But the dearth of expensive equipment matters. Zeck, who worked as an obstetrician/gynecologist in Tanzania, said women were often unsure how pregnant they were, and he would have to use his hands to estimate whether a fetus was premature or seriously underweight.

Still, among countries that have made dramatic improvements is low-income Rwanda, which more than halved its rate from 1990 to 2016, illustrating that “political will to invest in strong health systems... is critical,” the report said.

Education matters, too. Babies born to mothers with no education face nearly twice the risk of early death as babies whose mothers have at least a secondary education.

The United States — generally affluent, but with considerable income inequality and wide variations in access to health care — was only the 41st safest country for newborns.

The countries with the lowest newborn mortality rates, after Japan, are mostly well-off countries with strong education and health care systems: Iceland (a one in 1,000 chance of death), Singapore (one in 909), Finland (one in 833), Estonia and Slovenia (both one in 769), Cyprus (one in 714) and Belarus, Luxembourg, Norway and South Korea (all with risks of one in 667).