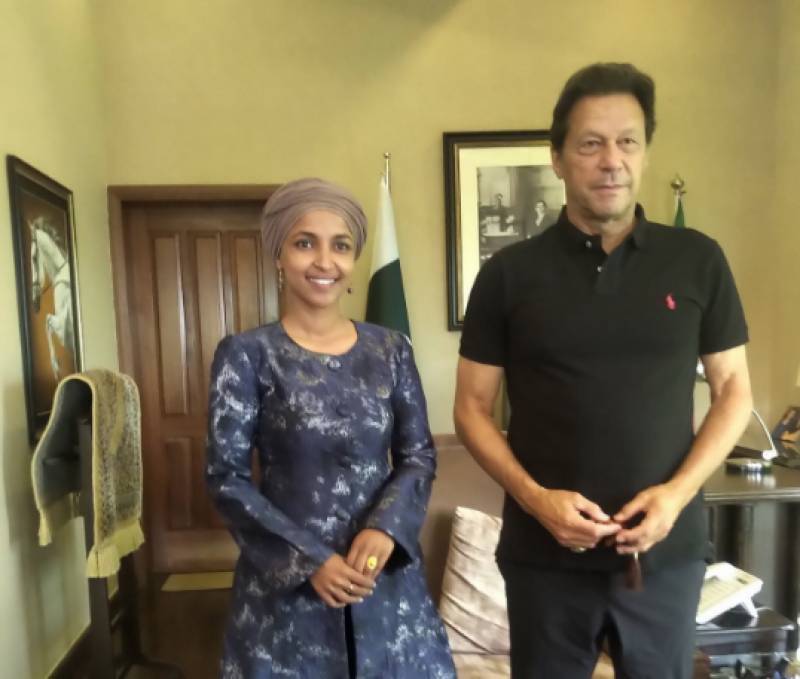 ISLAMABAD – Ilhan Omar, who made history as one of the first two Muslim women elected to the US Congress, met ousted Pakistani premier Imran Khan during his four-day visit to the South Asian country.

Former Human rights Minister Shireen Mazari shared the picture of the two on the official handle. The outspoken politician American politician arrived at Bani Gala, a suburb in the country’s federal capital, and exchanged views on Islamophobia and other issues with PTI Chairman.

Ilhan, a Somali-born former refugee, also expressed her admiration for cricketer turned politician and his position on work against Islamophobia across the globe, Mazari said, adding that party chairman Imran Khan also commended her principled position on issues like Islamophobia.

The US Congresswoman is scheduled to visit Azad Kashmir during her stay. She arrived in Islamabad earlier today, where she was received by Foreign Office officials.

A senior AJK official told a publication that Omar will also meet Azad Kashmir’s President Barrister Sultan Mehmood Chaudhry in Muzaffarabad tomorrow. She will also visit a refugee camp in the region, however, the details of her activities have not been officially shared.

This is reportedly the first meeting of Imran Khan with any US official following his ouster as the PTI chief continued referring to a US-led plot to remove his government.

The visit of the American politician to Azad Kashmir also garnered attention as she earlier pressed US senior diplomats for not speaking against the long-standing campaign against Muslims in Indian occupied Kashmir.

The Democrat leader also speaks out against Islamophobia and is a frequent target of extremist groups. Omar represents the State of Minnesota in Congress, one of the two Muslim women elected to the US Congress in 2018.