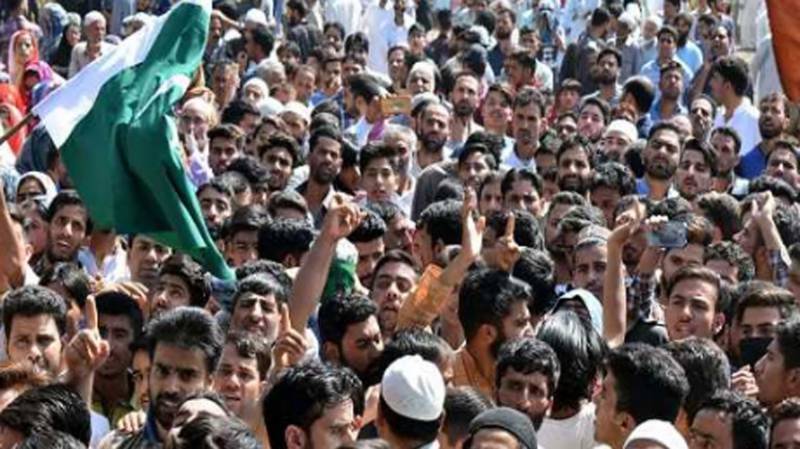 In occupied Kashmir, a sea of people defying curfew-like restrictions turned up for the funeral prayers of the latest victim of Indian state terrorism martyr Showkat Ahmad Butt at Padgam Pora in Pulwama district.

Showkat Butt a pharmacy graduate from University of Kashmir was shot dead by Indian troops in Kakapora area of the district early Thursday morning.

The troops also sealed all the roads leading to Padgam Pora village to prevent people from attending his funeral immediately after the killing.

Anti-India and pro-freedom slogans were chanted, while Pakistani flags were also hoisted on the occasion.

In Kashmir University, students in large number assembled at the varsity campus and marched through streets in Hazratbal area of Srinagar shouting anti-India and pro-freedom slogans.

Meanwhile, normal life was paralyzed in the Kashmir valley, today, due to complete shutdown against the killings, arrests under draconian law Public Safety Act, destruction of houses, harassment of students and other repressive measures unleashed by Indian forces.

Call for the strike was given by the Joint Resistance Leadership.  The lawyers associated with High Court Bar Association staged boycott of the courts.

On the other hand, the authorities slapped APHC leader Nisar Hussain Rather with draconian Public Safety Act and shifted him to Kotbalwal jail in Jammu.