Pakistan beats Australia in its highest ever Test defeat margin against Aussies
19 Oct, 2018 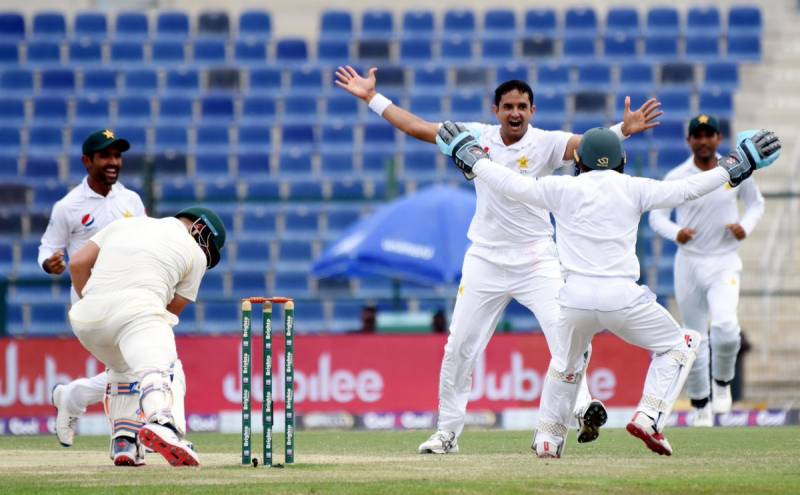 Mohammad Abbas followed his 5-33 in the first innings with figures of 5-62 to wreck Australia for 164 after they were set a big 538-run target.

The win gave Pakistan a 1-0 win in the two-match series after Australia fought back to draw the first Test in Dubai last week.

This becomes Australia s heaviest defeat against Pakistan, beating the 356-run hammering at this same venue four years ago.

It was Abbas who destroyed Australia with a haul of 17 wickets in the series -- becoming the first Pakistani fast bowler to take ten wickets in a Test since Mohammad Asif’s feat against Sri Lanka at Kandy in 2006.

Abbas had jolted Australia with four wickets off just 23 balls while Yasir Shah finished with 3-45 to give Pakistan their tenth series win on the neutral venues of United Arab Emirates (UAE).

Australia have only lost one series -- 2-0 to Sri Lanka last year -- since being forced to play their home matches in UAE since 2009.

Pakistan were forced to play their home matches in UAE since attacks on the Sri Lankan team bus in Lahore in March 2009.

Australia’s batsmen had no answers to his accurate seam bowling under cloudy conditions at Sheikh Zayed Stadium as only Marnus Labuschagne (43), Travis Head (36) and Aaron Finch (31) offered some resistance.

The first Test ended in a draw in Dubai last week.

Australian opener Usman Khawaja could not bat after suffering a recurrence of a knee injury during practice on Thursday.

Abbas jolted the Australians in the seventh over of the day when he removed a solid-looking Head, getting an edge to substitute wicketkeeper Mohammad Rizwan, deputising for Sarfraz Ahmed.

Sarfraz, who was hit on the helmet by a rising Mitchell Starc delivery on Thursday, had gone for a precautionary scan.

Head and Finch added 61 runs for the second wicket while Starc (28) and Labuschagne added 67 for the sixth wicket, but it only delayed the inevitable.

Australia had reached 155-7 at lunch with the writing very much on the wall.

Pakistan made 282 in their first innings and then bowled out Australia for a paltry 145, gaining a match winning 137-run lead.

The highlights of Pakistan’s batting in this match were 94 and 66 from opener Fakhar Zaman in his first Test while skipper Sarfraz returned to form with innings of 94 and 81.

Both the teams now play a series of three Twenty20 internationals with the first in Abu Dhabi on Wednesday. APP/AFP