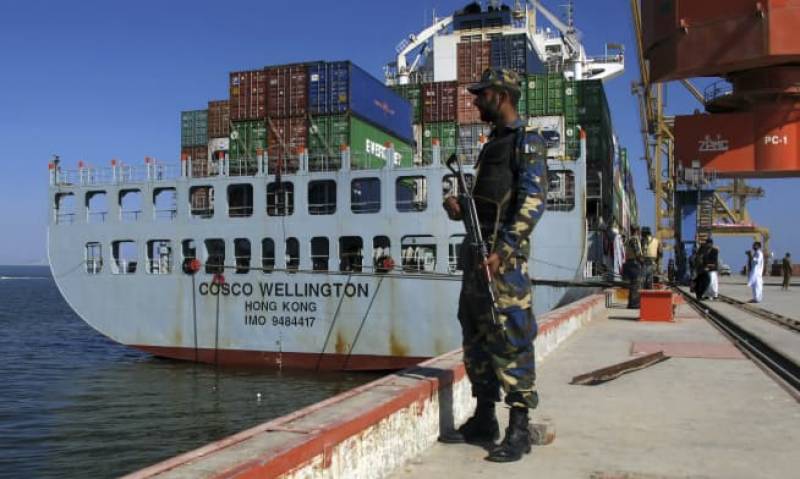 ISLAMABAD - With growing U.S.-China tensions and with the rise of the simplifying “Thucydides Trap” narrative, we are often tempted to perceive many of Beijing actions as done deals, and as initiatives of far-reaching, strategic implications. The truth, as always, is that reality is complex and only time will tell. One of the stories that often flows on this hype is that Pakistan’s civilian port of Gwadar – which is now being developed with the help of Beijing – will become a Chinese naval base.

To be sure, I do think it would be natural, from a strategic perspective, for Beijing to start running a base for its navy in Pakistan *at some point in the future*. But just because I believe so does not mean I can twist and cherry-pick evidence to prove it is already happening, The Diplomat has reported.

Has Gwadar port become a base for the Chinese navy? There is no open source evidence for this and the current level of the port’s development would make this rather impossible. There is also no public inter-government agreement or a statement of each of the governments available to prove that Islamabad has handed over Gwadar – or is going to do so – for the use of the PLAN (the People’s Liberation Army Navy, i.e. the Chinese navy).

Many things may be kept secret of course, though in the case of Djibouti, we did learn of the agreement between the governments before the base was officially set up.

And can we find evidence that Gwadar is becoming a Chinese naval base? A sincere reply should once again be: no. In the last years, a few articles on this subject caused a wave of alarmist headlines across the global media (such as a *South China Morning Post* story link published in January 2018). What they had in common, however, is that they referred to unnamed sources (such as people “close to the PLA”), to the opinions of experts, and to unverifiable stories (such as secret meetings between Pakistani and Chinese officers).

That does not have to mean these accounts are untrue – it just makes them impossible to corroborate. Most importantly, these texts talked of *plans* to establish such a base, not of evidence that the Gwadar port is becoming one now.

What can be said for sure is that presence of the Pakistani navy at the (still formally civilian) port of Gwadar is indeed growing. Pakistani navy ships were already found to be docking at Gwadar, both spotted by satellites and simply reported by the country’s press. In December 2016, the Pakistani navy created Task Force-88 link to protect the sea lanes coming to and from Gwadar. Navy vessels have thus been arriving at Gwadar escorting transport ships (which does not mean they could not appear there for other reasons as well).

In March 2018, for instance, Gwadar welcomed its first container vessel link (MS *Tiger),* in the company of two navy ships, PNS *Dehshat* and PNS *Karar*. There are also Pakistani soldiers stationed at Gwadar and one of their responsibilities is to protect the Chinese citizens who are working on the port’s development.

Very importantly, a November 2018 brave investigative piece by Maqbool Ahmed link published in a Pakistan journal, the *Herald*, presents evidence for a broad land acquisition drive by the Pakistani navy around Gwadar.

The story should have gained global publicity at the scale of the *South China Morning Post* piece — it deserved recognition much more than the latter — but it has not. The *Herald* has been closed since then. It a yet another instance of how local journalism often finds it hard to compete with reputed international papers, even in the cases when the former is based on risky, ground-level investigation and the latter on secure conversations with easily accessible sources.

Maqbool Ahmed claimed that the navy is acquiring property (and establishing checkpoints) not only close to Gwadar (in its lagoon) but even much further inland. The scope of this process would suggest that the country’s naval forces are preparing to entrench themselves in Gwadar.

All of this relates to the presence of the Pakistani navy, not the Chinese one, however. A visit by the Chinese navy elsewhere in Pakistan would hardly be surprising by now given the countries’ relations – as in the case of a July 2018 story link of two PLAN submarines in Karachi – but open source material does not prove that Chinese vessels have been using Gwadar. The only Chinese armed vessels that have certainly come to Gwadar were the two patrol ships (PMSS *Basol* link and PMSS *Hingol* link) that Pakistan actually purchased from Beijing link, received in 2017, and tasked with protecting Gwadar and its vicinity.

Is there any verifiable evidence of the Chinese at least planning to use Gwadar as a naval base? Not really. It could be pointed out, however, that while China provided loans for a number of projects in and around Gwadar (and throughout Pakistan), in 2015 Beijing changed the loans link into interest-free grants in two cases: the construction of the Gwadar airport and the Eastbay Expressway Project.

The expressway will connect the city to the airport and the regional highway. The “soft” explanation would be that the PRC added these grants as a freebie, a sweetener, as Pakistan borrowed heavily from China for the sake of Gwadar’s development anyway.

The “hard” interpretation would be that Gwadar’s infrastructure is so important for China that it is willing to partially finance it. The counterpoint to the latter interpretation is that the sum of these two grants is only $370 million and the Eastbay Expressway is to be only 19 kilometers long. These projects and their financial conditions can hardly be considered strategic game-changers by themselves.

To be sure, by “evidence,” I do not mean the broad strategic considerations. I am aware of the wide discussion on how much, given its location, Gwadar could be useful for PLAN, and there is no need to refer to these debates here. A base the size of Gwadar, remote and unsafe as its area is now, would be a natural choice for both China and Pakistan. It is one of the farthest bays on the Pakistan’s coast toward the west, as distant from the rival state of India as possible. It would also help to secure the vital sea shipping routes.

But these are speculations based on why could Gwadar work as a naval base* and not* *evidence that such a base is under construction*. The evidence, so far, is to the contrary – it seems that what is being constructed at Gwadar’s port are facilities that could be primarily used for economic and civilian purposes, and not the machinery needed for maintenance of large naval vessels.

Under the impressive carpet of words, the tall talk of the Belt and Road Initiative, the String of Pearls, and the China-Pakistan Economic Corridor, Gwadar still remains a remote, provincial city with its port currently under development.

It is very poorly connected to the rest of the country, it is not an economic hub by any standard, and so far faces very mundane problems, such as a shortage link of water and power (not to speak of the threat for Baloch armed groups, which in May 2019 have shown the capacity link to strike targets even within Gwadar city).

It not only does not serve a strategic military role now but also its significance as a future transportation hub remains to be verified. Maybe the PLAN does have a plan for Pakistan, but it is not being unveiled just yet.