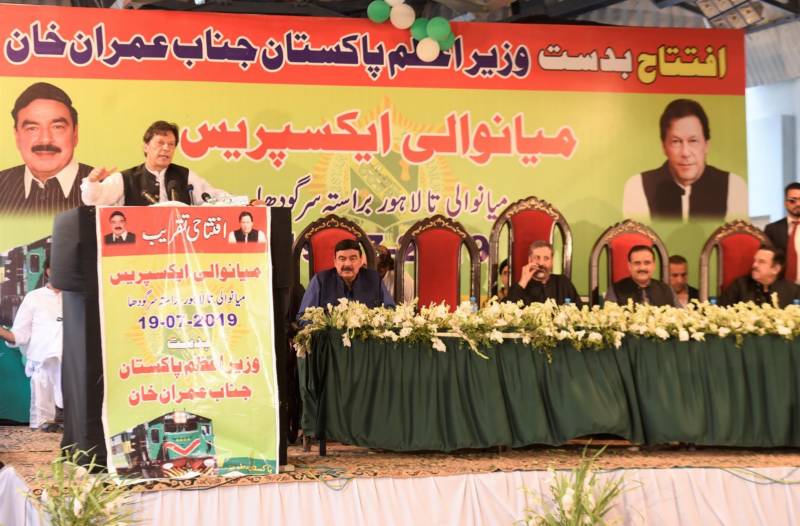 Addressing a ceremony after inaugurating Mianwali Express at Mianwali today, he said train is the mode of travel used by common man to move from one place to another and it will be further improved.

He said the economic challenges we inherited are being resolved.

He said under ML1 project the time to travel between Lahore and Karachi will be reduced to eight hours only. It will also reduce load of traffic on roads of Pakistan besides improving cargo handling by Pakistan Railways.

He said he will ensure that youth of Mianwali are imparted technical skills in order to increase their employability.

Imran Khan said there will be no compromise on process of accountability.

Railways Minister Sheikh Rasheed Ahmed in his address said the Mianwali Express will cater to travelling needs of large number of people of the area.

Mianwali Express will ply between Lahore to Mari Indus. It will depart Lahore at nine pm and reach Mari Indus at six am daily.

Speaking at ground breaking ceremony of a hospital at NAMAL Institute in Mianwali this afternoon, Prime Minister Imran Khan has reiterated his government's commitment to bring backward areas of the country at par with developed ones.

The Prime Minister said the construction of a state of the art hospital in a backward area will help the local population receive medical care.

He said spiritual happiness is achieved after helping the mankind.

He said the name of those people will always be taken with respect who work for humanity.

Imran Khan said NAMAL University was his vision of providing education to people in an area where people had no opportunities of getting higher education.

The Prime Minister said the number of PHD holders in NAMAL faculty has increased to twenty two from eleven. He said 97 students in the university are studying on scholarships.

Blaming corruption for various economic challenges Pakistan is facing, he said the country cannot move forward unless this menace is curtailed. He said the country's debt reached to 30,000 billion rupees from 6,000 billion rupees in a decade due to corruption and bad governance. He said inflation, devaluation of rupee and general economic malaise have been caused by the plundering and looting of national wealth during the last ten years.

Imran Khan said even the infrastructure projects completed by previous government are running on loss. He said a loss of twelve billion rupees is being incurred on annual basis on three metro bus projects in Punjab.

Referring to corruption cases against opposition leaders, the Prime Minister said most of these were instituted during the tenures of previous government. He made it clear that the process of accountability will continue without any discrimination. He said no influence or pressure will be tolerated from any side in this regard. He said some people incarcerated on corruption charges tried to influence him through recommendations from outside the country.

Responding to allegations of political victimization, Prime Minister said various cases were made against him in the previous government but he stood bravely against these fabricated charges and was eventually cleared by the courts. He said the people who are making furor today are unable to provide any money trail to their wealth.

The Prime Minister expressed optimism that difficult economic period will be over and country will become prosperous in future. He said government will increase investment on human development once the economic situation improves.