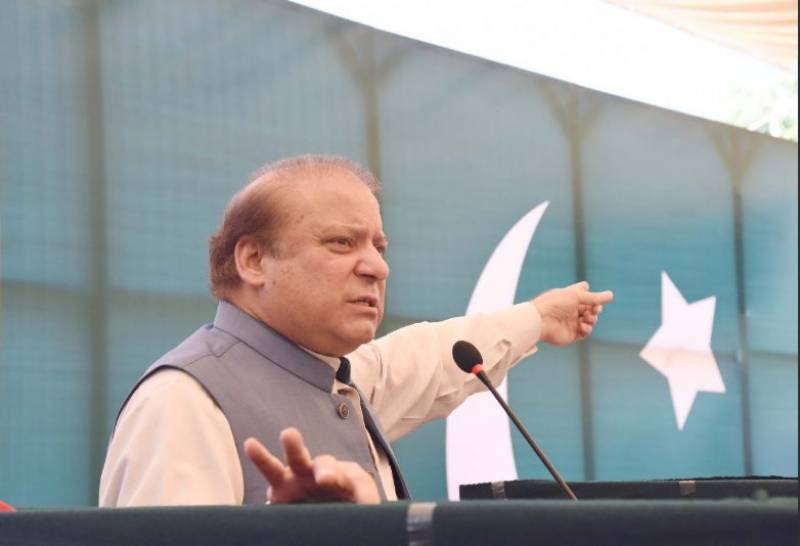 Prime Minister Nawaz Sharif says those demanding his resignation have repeatedly been rejected by people of Pakistan.

Addressing members of the business community at Sialkot Chamber of Commerce and Industry on Wednesday, he said despite massive pressure and  destabilization attempts, the government has  launched mega projects in infrastructure and communication sectors worth billions of rupees .

He said no one could prove even a penny of corruption.

Nawaz Sharif said today's Pakistan is much better than the one he inherited in 2013.

He said there are no allegations of corruption in public exchequer but his family is being held accountable for forty-four years.

The Prime Minister said first attempts were made to destabilize his government through sit-ins on the pretext of rigging in elections, then came the second phase of sit-ins and now he is facing third onslaught. He said unscrupulous elements do not understand dynamics of development and are interested in only ousting of Nawaz Sharif.

Nawaz Sharif expressed the confidence that he will emerge victorious.

He said never ever in the history of the country so many mega projects in different sectors and regions were launched as were implemented during the last four years.

The Prime Minister said despite financial constraints, he has embarked upon a comprehensive programme for construction and improvement of motorways and highways.

He said work is progressing ahead on Sialkot-Lahore Motorway besides Lahore-Multan Motorway. Similarly, Karachi-Hyderabad section of Karachi-Lahore Motorway is almost ready for inauguration on 14th of next month. He said contract for Sukkur-Hyderabad portion is being awarded.

Referring to Balochistan, the Prime Minister said apart from development activities, steps have been taken to restore peace and as a consequence it has effectively been mainstreamed with the rest of the country.

The Prime Minister said a number of projects in energy sector have been initiated, load-shedding has been reduced significantly and it will be eliminated next year. He said the cost of generation has come down from 15 rupees a unit in 2013 to 10 rupees  a unit now and is set to further slide to eight rupees.

Prime Minister Nawaz Sharif said had there been no negative politics Pakistan could have touched new heights of progress and development. He pointed out that the stock market index that stood at just 19000 points in 2013 surged to over 44000 recently and dropped by ten thousand points due to negative politics.

The Prime Minister announced that Lowari tunnel project has been completed due to keen interest of his Government and he will inaugurate it on Thursday.

During interaction, the business community of Sialkot emphasized that continuity of the investor friendly policies of the present government is a must for progress and prosperity of the country.

The office bearers of Chamber and businessmen lauded the economic turnaround achieved under the leadership of the Prime Minister.

Meanwhile, Prime Minister Muhammad Nawaz Sharif says his opponents who have repeatedly been rejected by people are leading the campaign to halt the process of progress and prosperity in the country.

Addressing PML-N workers in Sialkot on Wednesday, he said these elements have continuously been hatching conspiracies against the government even though they have been rejected by people many a time.

The Prime Minister said the people of Pakistan will respond to these conspiracies and the campaign of baseless allegations against him in the 2018 elections.

He said those who could not win through votes are trying to come to the power corridors through back door.

He said all the development projects are being implemented with transparency, and not a single scandal of corruption has surfaced during the last four years.

Muhammad Nawaz Sharif said a network of roads and highways is being laid across the country.

He said Lahore-Sialkot Motorway and Lahore-Multan section of Motorway will be completed next year. He said work on Multan-Sukkur Motorway is being carried out at a fast pace.

He said 168 billion rupees have been saved in three energy projects.