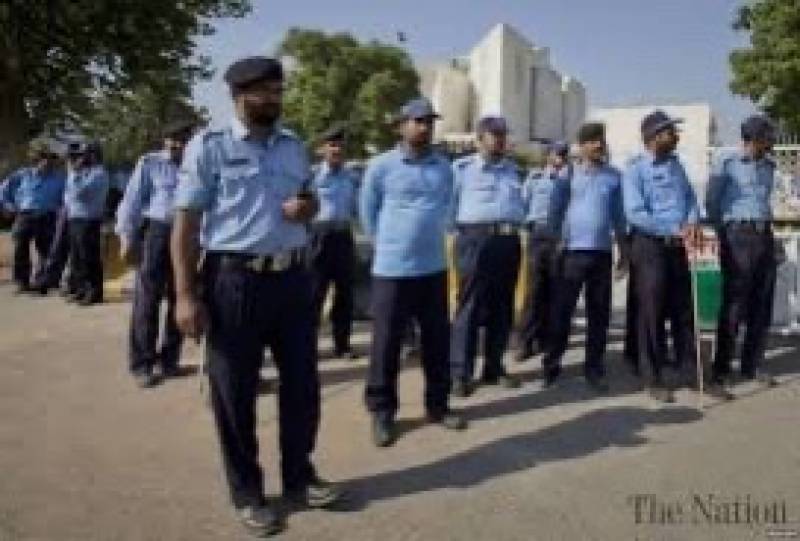 The security around the Election Commission of Pakistan (ECP) has been further alerted to avoid any unwanted incident amid the planned protest by the Pakistan Democratic Movement (PDM) against the delay in the decision of PTI's foreign funding case.

According to the sources, the federal government has deployed two platoons of the Punjab Rangers along with police personnel around the election commission and sealed the main entrance with barbed wire.

Moreover the walkthrough gates have also been installed in the Red Zone area for pedestrians.

PDM leaders will gather at the Kashmir Chowk at around 1pm from where they will go to the ECP aboard a container.

The PDM leadership met in Islamabad at the residence of Maulana Fazlur Rehman to review the protest strategy.

Addressing in the media briefing after the meeting alongside PML-N vice-president Maryam Nawaz, the JUI-F chief said the PTI foreign case cannot be delayed any further and urged the commission to announce a verdict soon.

“Decisions against elected prime ministers are given in a few months’ time but verdict against a selected premier has been pending for over six years,” he said.

“Foreign funding case is the biggest scandal in Pakistan. Imran Khan has amassed millions in the name of party funds. He took the mother of all NROs to create political instability in the country."

The protest will not be attended by PPP chairperson Bilawal Bhutto Zardari who is currently in Sukkur and plans to celebrate PPP's win in the Umerkot by-polls.On Monday, Interior Minister Sheikh Rasheed warned the Opposition parties to not take the law into their hands during the protest else they will be responsible for the consequences.

The minister said he had a meeting with Prime Minister Imran Khan to discuss the measures being taken regarding the PDM’s protest during which he directed him to ensure that no seminary student was brought to the protest.