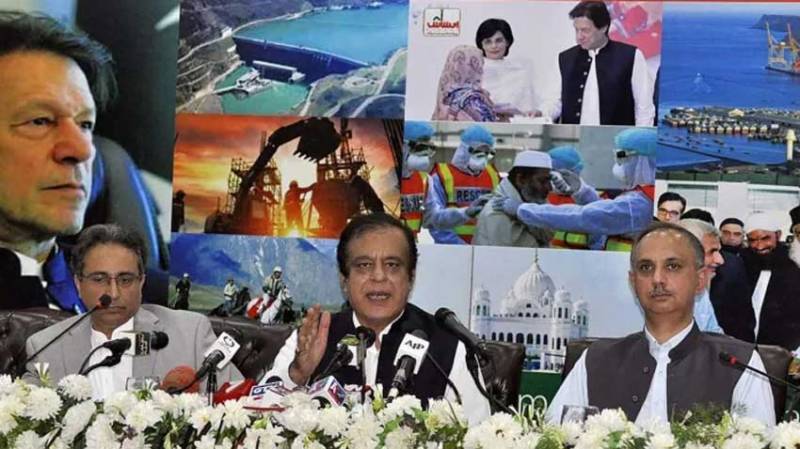 ISLAMABAD- Information Minister Shibli Faraz has said the economy stands revived and the country has been put on the path of development.

Flanked by other cabinet members, he was addressing a news conference about the government's two years' performance in Islamabad today [Wednesday].

Shibli Faraz regretted that the opposition parties are trying to create anarchy and spread despondency in the country.

He, however, categorically stated that the mafias and those representing them will not be spared under any circumstances.

The Information Minister said the nation which faced the difficult period steadfastly stands by the government and all the conspiracies will be foiled through their support.

He expressed confidence that the fruits of development will reach the masses soon.

Speaking on the occasion, Minister for Communications Murad Saeed said Prime Minister Imran Khan's vision of austerity, accountability, transparency and self-sustainability is being implemented in the projects in letter and spirit.

The Minister said initiatives of introduction of e-billing, e-bidding and procurement, were introduced in the National Highway Authority to ensure transparency.

The Minister said several steps have also been taken to improve functioning of postal services.

Minister for Science and Technology Fawad Chaudhary said their effort has remained to transform Pakistan into a manufacturing economy by promoting the logo of 'Made in Pakistan.

He said Pakistan has become one of the major exporters of Personal Protective Equipment in a matter of six months. He said currently Pakistan is producing 250 ventilators every month and this capacity will be enhanced to seven hundred in  order to enable Pakistan  become one of the few countries exporting this sophisticated machine.

The Minister for Science and Technology said his ministry has also set targets for the current year. He said this included development of agricultural farms on modern lines.  He said our plan is to establish five hundred technology farms and promote non-conventional crops to enhance the agri exports.

The Minister said our target is to establish a special economic zone for electromagnetic industry in Sialkot.  He said Pakistan will start producing more sophisticated machines such as the one used in dialysis this year.  He said our target is also to enhance our exports of surgical items to two billion dollars in one year time.

Fawad Chaudhary said we have also envisaged a project to ensure domestic production of agriculture machinery.  He said we also plan to bolster production of different kinds of chemicals in the country to save the foreign exchange currently being spent on their import.

Presenting performance of his ministry, Minister for Power Omar Ayub said the PTI government has been working to reverse the present energy mix of 70 percent power generation through imported resources.

He said the government plans to produce 70 percent of the country's energy through indigenous means by 2030. He said an Alternative Renewable Energy Policy has been approved by the Council of Common Interests.

The Minister said projects are being launched on competitive basis so that people get affordable electricity and several companies are interested to invest in Pakistan under Alternative Renewable Energy Policy, which will also generate several jobs. He said technology will also be transferred to Pakistan.

He said work has been underway on four hydro power projects, including Munda Dam, Diamer Bhasha Dam, and Kohala Dam. He said a total of about 7000 megawatts of electricity will be produced through hydro-power projects. He said 15 wind power projects have also been initiated, which will produce 800MW power.

The Minister for Power said the present government has also worked to improve electricity transmission system in the country, which was ignored by the previous governments. He said the initiatives taken by the PTI government have led to transmit additional 4500 MW electricity. He said line losses have also been reduced. As part of reforms in energy distribution, Omar Ayub said the government has regularized 8390 employees.

Minister for Inter Provincial Coordination Fahmida Mirza says that after the 18th Amendment in 1973 Constitution, Council for Common Interest under the "Cooperative Federation" slogan is the main forum to strengthening the federation.

She said her ministry is fully determined for the provision of all basic facilities and conducive environment to the athletes of the country and anti-doping board is being constituted for the awareness among the players.

She said that we are also making sincere efforts for the provision of sports facilities in prisons, religious seminaries and other institutions across the country.

The Minister said a strategy has been evolved in consultation with provinces for the promotion of tourism in the country.

Minister for Human Rights Shireen Mazari said protecting the human rights of different segments of the society is the central agenda of present government.  She said her ministry has pursued a three pronged strategy for this purpose. This included implementation of existing laws, bringing new legislation and creating awareness amongst the people about their rights.

The Minister said it is the for the first time that we proscribed the child domestic labor whilst the bill against corporal punishment has also been prepared.   She said other bills including Christian Divorce and Marriage bill are currently in the discussion phase. We have also prepared a registry of sex offenders to curb this crime.

She said we addressed seventeen thousand complaints registered on the citizens portal and provided legal aid to eleven thousand people.  He said our helpline received millions of calls over the last two years and effort was made to address their complaints.

Shireen Mazari said concrete steps have also been taken so that the transgender community also get their due status in the society.

She said her ministry has also played its part in highlighting the blatant human rights violations in Indian illegally occupied Jammu and Kashmir. She said she has also written a letter to the UN Human Rights Commissioner about the situation in the occupied territory.

The Minister said the government is also securing the country's rights vis a vis on India on Indus Water Treaty.

Minister for Maritime affairs Ali Zaidi while briefing the Media about the two years performance of the government said that private sector will get advantage from the new shipping policy.

Addressing media persons the minister said that we are planning to digitalize the land of the Port Qasim which will be landmark initiative of the government.

He said that due to the new policies of the incumbent government, international companies are approaching to work with us which is taking place exactly according to the vision of Prime Minister Imran Khan.