8 years ago on this day journalist Hamid Mir had claimed that DG ISI had made assassination attempt against me: Report
19 Apr, 2022 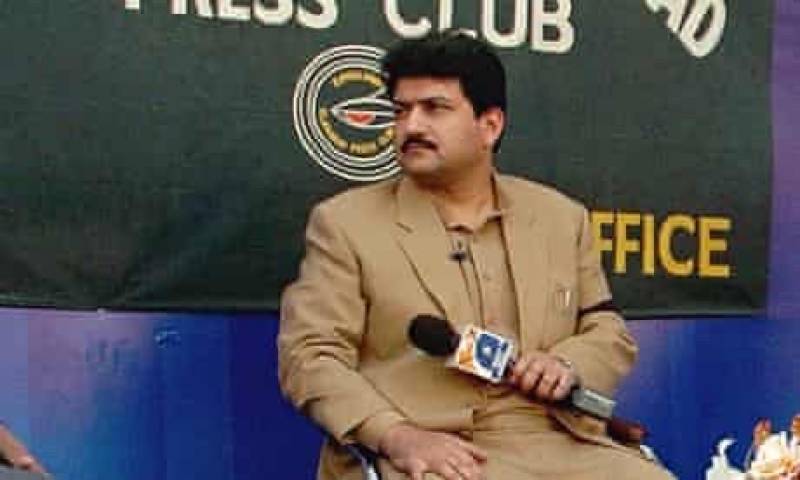 More than a hundred bouquets line the lobby of the private ward of Karachi's posh, private Aga Khan Hospital. Outside, dozens of policemen with bulletproof vests and automatic weapons look at every visitor suspiciously, officers speaking urgently into their walkie-talkies. The Karachi police force is really good at strutting about after a high-profile crime has happened. One of the largest bouquets in the lobby is from the force. "Get well Hamid Mir," it says. "We may not be able to protect you," it implies, "but we know where to order the best flowers."

Mir link is upstairs recuperating. He took six bullets – in the ribs, thigh, stomach and across his hand – in an assassination attempt on Saturday as he came out of the airport to present a special broadcast on Geo link, Pakistan's largest news channel. Mir had warned about a possible assassination. He had also named his would-be killers.

That's what his brother claims, that's what his colleagues and managers at the channel say. Geo, just after the attack, broadcast the allegation and, in an unprecedented move, also flashed the picture of the accused: the head of Pakistan's Inter-Services Intelligence chief, Lieutenant General Zaheer ul-Islam. In that picture he comes across as a big man.

We are not supposed to know much about him except the fact that he is a very professional general. According to an internet myth very popular in Pakistan, the ISI link has been rated as the world's No 1 intelligence agency: Mossad is No 5 and MI6 languishes at No 9. According to television ratings, the man with three bullets still in his body is Pakistan's top-rated TV journalist and one of the most vocal critics of Pakistan's military and intelligence agencies.

One of the modest bouquets wishing Mir a full and speedy recovery is from the prime minister of Pakistan, Nawaz Sharif link, who visited him in the hospital earlier this week after announcing a judicial inquiry.

Going by the history of judicial inquiries in Pakistan, Sharif seemed to be saying: "Look Hamid, we want you to get well but don't really expect us to find out who tried to kill you. Who is going to go and ask a working general? Meanwhile, here are three senior judges who will help you get over the whole thing."

The day after the assassination attempt, Pakistan's army chief General Raheel Sharif visited the ISI headquarters to show that he stands with his intelligence boss.

And the very next day, the Defence Ministry recommended that the channel for which Mir works should be shut down link for bringing a national institution into disrepute. Geo's competitors have joined the chorus.

For years, Pakistan has been one of the world's most dangerous countries for journalists link. From feudal landlords to Taliban fighters, sectarian groups to separatists link, all have killed journalists. The question one needs to ask is: does the ISI, a national body often referred to as "a sensitive institution", occasionally kill journalists? As any trained journalist would tell you, we need two sources before we can tell you a story. Here are two stories, with multiple sources and two different endings.