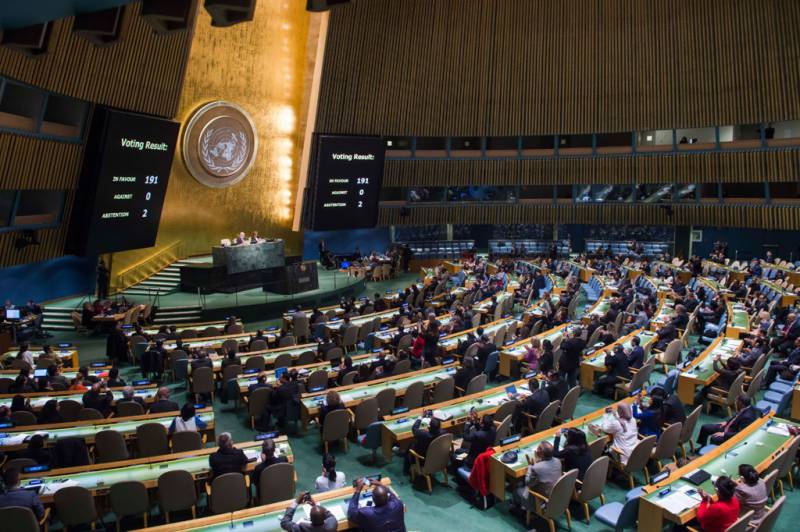 UNITED NATIONS (APP): Under the instructions from United Nations Secretary-General Antonio Guterres, the UN Friday removed from its websites a report by one of its agencies concluding that Israel has established an "apartheid regime" that discriminates against Palestinians.

The report titled "Israeli Practices Toward the Palestinian People and the Question of Apartheid," which was published on Wednesday by the United Nations Economic and Social Commission for Western Asia, drew swift criticism from United States and Israeli officials.

Its authors had concluded that "Israel has established an apartheid regime that systematically institutionalizes racial oppression and domination of the Palestinian people as a whole."

Rima Khalaf, a Jordanian who heads the Beirut-based ESCWA, announced her resignation at a press conference in the Lebanese capital Friday, after refusing to withdraw the report.

She described the report as "the first of its kind," adding that it "concludes scientifically and according to international law that Israel has established an apartheid regime."

"It was expected, naturally, that Israel and its allies would exercise immense pressure on the U.N. secretary general to distance himself from the report and to ask for it to be withdrawn," she said. Khalaf said U.N. chief instructed her on Thursday to withdraw the report.

"I asked him to review his position but he insisted on it. Based on that, I submitted to him my resignation from the United Nations."

After Ms. Khalaf, who has long been criticized by Israeli officials for her perceived anti-Israel positions, left the office, the report was taken down from the UN websites. U.N. spokesman Stephane Dujarric confirmed that the removal of the report, saying it was published without any prior consultations with the U.N. Secretariat and its views do not reflect those of the secretary-general.

In 2015, Israel's then ambassador to the U.N., Ron Prosor, urged the organization's internal watchdog to investigate her, accusing her of "modern day anti-Semitism." The year before he tried unsuccessfully to get then Secretary-General Ban Ki-moon to suspend her, who responded by saying that he had "full confidence in her, and her work."

Israel's U.N. Ambassador Danny Danon said the report was an "attempt to smear and falsely label the only true democracy in the Middle East by creating a false analogy is despicable and constitutes a blatant lie."

Danon appeared to welcome Khalaf's U.N. exit. "Over the years Khalaf has worked to harm Israel and advocate for the (Boycott, Divestment and Sanctions) movement," he said in a statement issued by Israel's Foreign Ministry. "Her removal from the U.N. is long overdue."

A Palestinian rights activist, Omar Barghouti, however, praised the report, describing it as potentially the "first beam of light that ushers the dawn of sanctions against" Israel.

UN's Guterres distanced himself from the report after it was published, with U.N. spokesman Stephane Dujarric saying earlier this week that "the report as it stands does not reflect the views of the secretary-general" and was done without consultations with the UN secretariat.