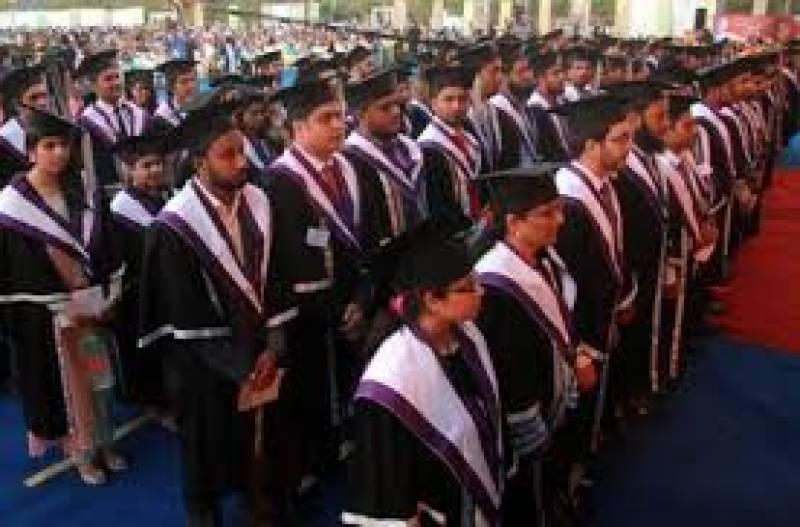 BEIJING: Pakistani students graduating from China are playing a vital role in promoting the deep-rooted friendship between China and Pakistan as well as the success of China-Pakistan Economic Corridor (CPEC).

The first group of Pakistani students came to China in 1964. Since then, there has been an increasing trend in the number of students from Pakistan studying in China. This number has witnessed a sharp increase in the last few years in particular, according to an article published by Global Times on Thursday.

Under new policies launched by the Ministry of Education of China, which have attracted more students from countries and regions along the routes of the China-proposed Belt and Road Initiative (BRI), Pakistan has become one of the largest beneficiaries of the Chinese education system.

First of all, Chinese universities are achieving high rankings among the top 500 universities in the world. Some are also among the world's top 100, including Tsinghua University and Peking University. A university's ranking is the basic criterion for attracting foreign students.

Visa restrictions in western countries have made it even more difficult for those from developing countries to avail of the educational facilities there.

China has become a leading country for the education of people from developing countries to meet the challenges emerging in the modern world. China's educational system has proven itself as the fastest of any developed country in history and is now contributing toward educational development in many BRI economies, as well as poverty eradication and industrialization.

Pakistan, being a close friend of China, is one of the biggest beneficiaries of the Chinese education system. There was a time when Pakistani students were going to the UK and Europe for higher education in the 1950s, 1960s and 1970s. Then the trend changed and more young people were choosing the US for higher education. The most recent trend is traveling from Pakistan to China.

The current enrolment of Pakistani students in China is estimated at around the 28,000 mark. This number will jump much higher as this year, many more students have applied for admission into Chinese universities and are expected to enter China by September.

With the launch of the BRI, there was the intention to promote greater understanding in countries along the route. To promote harmony, the exchange of students is always the best tool. The China-Pakistan Economic Corridor (CPEC) is a flagship project and may become an important role model for the rest of world. Under the CPEC, many projects have been executed in Pakistan, many are being executed, and more are in the pipeline.

Pakistani students graduating from China are playing an instrumental role in the China-Pakistan friendship. These students live in China for several years to complete their education. They learn Chinese culture, traditions, history, society and the local system, in addition to the Chinese language and a specialization in their own degree programs.

Once they return to Pakistan, they promote Chinese awareness there and serve as ambassadors of China in their home country. At the same time, knowledge gained in China is utilized in the socio-economic development of Pakistan.

Most Pakistani students graduating from China are working in Chinese projects under the CPEC and are helping both countries for mutually beneficial cooperation. In fact, they are acting as a bridge. Some of them have their own businesses and are making contributions to the economic cooperation between China and Pakistan.

Most, however, are in universities and creating goodwill for China among the youth of Pakistan. They are producing a workforce generation for the future, which is well-equipped with knowledge about China. Some are also involved in research organizations and are playing an instrumental role in the development of science, technology, and innovation in Pakistan.

Pakistan may soon get Pakistani students who graduated from schools in China involved in the development of the CPEC and associated policies.

The full potential of the CPEC can be achieved only through the involvement of Pakistani students graduating from China at all levels from design to execution, from policy formulation to decision implementation, and so on. Pakistani graduates are assets for Pakistan as well as for China.