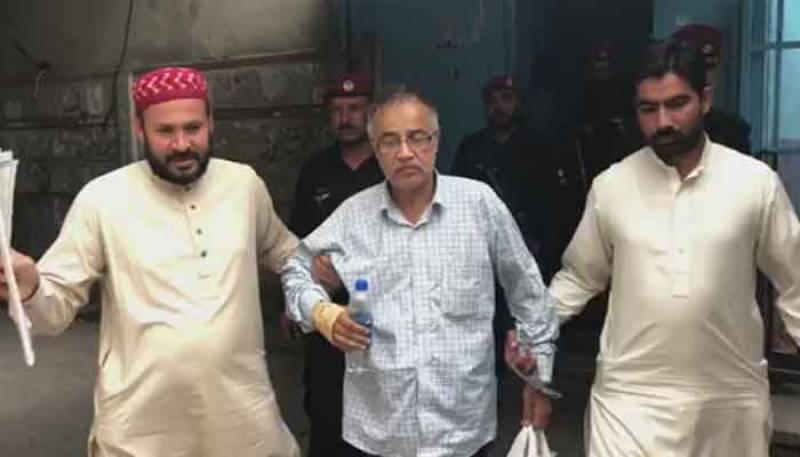 ISLAMABAD: The Civil Judge Islamabad Shaista Kundi has approved two-day physical remand of Mian Tariq Mehmood, the man allegedly involved in the video scandal case surrounding accountability judge Arshad Malik. The suspect was shifted to the FIA custody after the remand was approved here on Wednesday.

The Federal Investigation Agency (FIA) Cyber Crime Wing has presented Mian Tariq Mehmood who was the central character of video scandal surrounding Accountability Judge Arshad Malik in court and demanded 10 days physical remand. But the court has approved only two days physical remand and directed the FIA to present the accused again on July 19 (Friday).

of the judge. The case was registered on the complaint of the judicial officer of accountability court.

The complainant said in his written application that he made the video about 10 years back when he was serving in Multan and now sold it to the leadership of PML-N. "It is humbly stated that I was posted as Add Session judge Multan from 2000 to 2003. During that period one Mian Tariq (who had a second hand TV shop near Fawara Chowk, Multan), trapped me through intoxication/sedation for secretly making a compromising video and manipulated into an immoral video to blackmail me. Several years passed in silence and now I learned that about 4/5 months ago that Mian Tariq and his accomplices had sold that video to a Lahore based PML-N leader namely Mian Raza.

I was shocked when basing on the video, a group of people including Nasir Janjua, Nasir Butt, Khurram Yousaf and Mehar Ghulam Jilani started pressurising and blackmailing me to help Mian Nawaz Sharif who has earlier been convicted by me in the NAB reference," read a copy of the FIR lodged in Arshad Malik case, also exclusively made available to this correspondent.

Judge Malik, through the Ministry of Law, got lodged this complaint with the FIA where Umer Aziz, Joint Secretary Law, addressed FIA Director on July 15, 2019 requesting him to lodge an FIR for illegally recording of audio and video images without permission with the intent of blackmailing to defame him (the judge).

According to FIA Crime Wing officials, the accused was trying to run off to Dubai. The FIA officials have already done forensic of video which was found from the accused’s house during a raid.

Judge Arshad Malik who had in December last year sentenced Nawaz to seven years in jail in the Al-Azizia Steel Mills corruption reference and acquitted him in the Flagship Investment case has been at the centre of controversy since July 6, when PML-N Vice President Maryam Nawaz alleged that he had been "blackmailed" into giving the verdict against Nawaz Sharif.

Accountability Judge Arshad Malik had presented an affidavit to the Islamabad High Court (IHC) chief justice as a rebuttal to Maryam Nawaz's press conference. In his affidavit judge said that Tariq Mahmood an old acquaintance of his, had been the one to show him a "secretly recorded manipulated immoral video [showing him] in a compromising position" that was shot while the judge was serving in Multan.

The judge said that this video was later used by Nawaz Sharif's long-time supporter Nasir Butt to blackmail him. Accused Tariq Mehmood will be presented in court on July 19 after a medical checkup. He was brought to the civil court in an armoured personnel carrier (APC) with heavy security protocol on Wednesday.