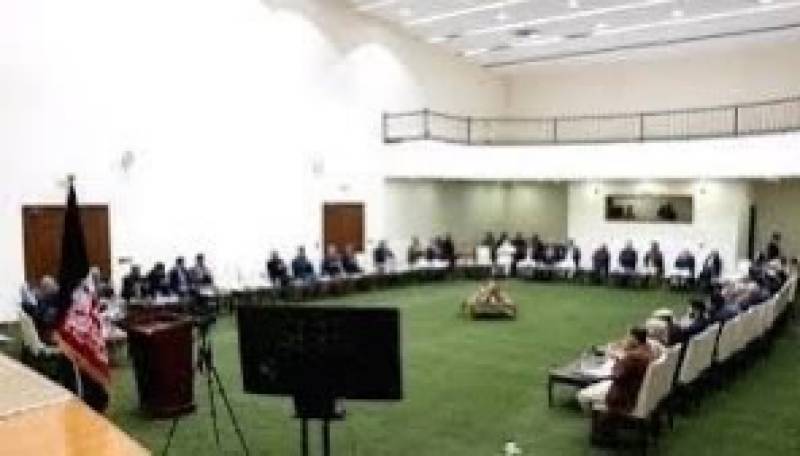 KABUL (Tolo News): Some members from each side in Doha, including the chief negotiators, held a meeting and discussed the agenda, said Republic negotiator Nader Nadery. The meeting comes after days of delay. Over the nine days since the start of the second round of talks, the two sides have held four meetings, including, at the working group level, but they haven’t had progress in finalizing the agenda that will open the way for formal talks.

“Afghans are seeking peace and ceasefire. Even one day that goes to waste is a lot for them,” said Haji Din Mohammad, the deputy head of the High Council for National Reconciliation. “Based on my information, both the government and the Taliban are not interested in beginning the negotiations ahead of (Joe) Biden’s inauguration,” said Ata Mohammad Noor, the CEO of Jamiat-e-Islamic party.

“The Taliban leaders have arrived in Doha few days ago and I think that their absence in Doha was one of the reasons behind the delay in the negotiations,” said Sayed Akbar Agha, former Taliban member. Meanwhile, National Security Adviser Hamdullah Mohib in a trip to the southern province of Helmand warned that the Taliban should embrace peace or they will be faced with a response by security forces.

“We will fight against those who do not want peace,” Mohib said. This comes as violence has increased in the country in recent days, including targeted attacks in cities like Kabul. The Taliban claimed the responsibility for a complex attack on an NDS facility in the southern province of Kandahar. Local officials said four attackers were killed in the attack that started with a car bomb explosion.

The officials said the attack took “no casualties” from Afghan forces. Taliban spokesman Mohammad Naeem said that US special envoy Zalmay Khalilzad met with Abdul Ghani Baradar, head of the political office, and Mawlawi Abdul Hakeem Haqqani, head of the negotiating team, and discussed the peace agreement and emphasized that issues should be solved via dialogue and that every side should fulfill its responsibilities in a fair way.

Earlier, no progress has been made in finalizing the agenda for the peace negotiations eleven days after the return of the negotiators of the Islamic Republic of Afghanistan and the Taliban to Doha at a time that violence has taken momentum in the country. At least seven provinces witnessed attacks by militants in less than 12 hours, leaving over 19 security force members dead, according to officials. The incidents happened in Kabul, Herat, Baghlan, Laghman, Nangarhar, Kandahar and Helmand provinces.

Sources from both parties said that no meeting was held today between the contact groups about agenda of the talks. “The delegates have held their internal meetings about preparing the subjects for the agenda and their contents and are fully ready to conduct more talks on it,” said Najia Anwari, a spokeswoman for the State Ministry for Peace Affairs. This comes a day after the US Department of Defense in a statement confirmed that the number of US forces in Afghanistan has reached 2,500 as directed by President Donald Trump.

“Today, the United States is closer than ever to ending nearly two decades of war and welcoming in an Afghan-owned, Afghan-led peace process to achieve a political settlement and a permanent and comprehensive ceasefire,” the statement said quoting US Acting Defense Secretary Christopher Miller. A Taliban spokesman Mohammad Naeem welcomed the move as a step forward to resolve the conflict in the country.

“The withdrawal of more US forces from Afghanistan, which was announced by the US yesterday, is a good advancement and practical measure,” Naeem said. “Undoubtedly, the practice of the agreement signed between the IEA and the US is in the benefit of both countries.” He said that they remain committed to the agreement and want the same “from the other side.”

The US-Taliban deal signed on February 29 raised hopes among Afghans for a reduction in violence but the Taliban in defiance of international calls, continued their attacks against the Afghan government forces. “In some extent, we have lost the authority, we are doing what the strangers tell us to do. I think if the ongoing scenario continues, this will never take us to peace,” said Sayed Ishaq Gailani, head of the National Solidarity Movement of Afghanistan. Initially, there were some rumors that main talks on the agenda will start in the wake of US forces withdrawal.

A potential agreement on the modality of the future political system in Afghanistan and a ceasefire were among the key topics that were debated between the two sides over the past weeks. “Peace needs a price. We all should be prepared to pay this logical price in the context of our past views and perception,” the speaker of Afghan parliament Mir Rahman Rahmani said.