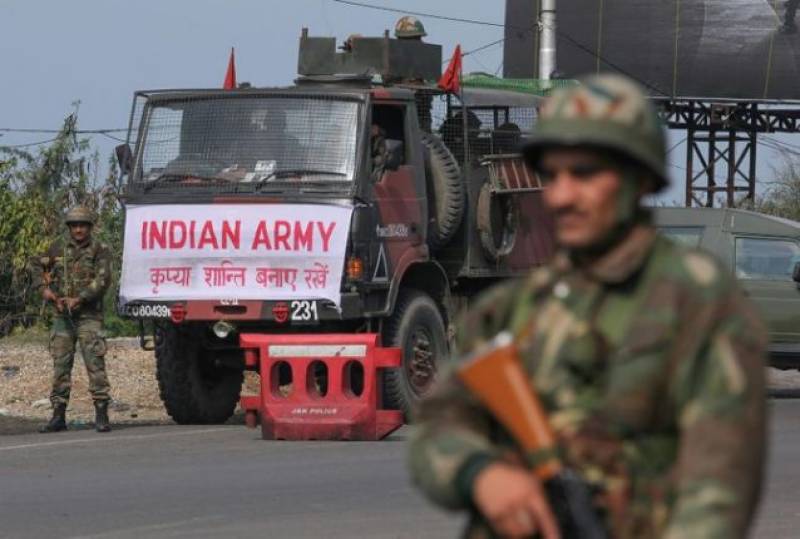 - [image: A Kashmiri man was beaten by a mob in New Delhi that accused him of chanting anti-India slogans]

The confrontation piled more pressure on the Indian government, which has blamed Pakistan for last Thursday's suicide attack on a convoy that killed at least 41 paramilitaries.

Several hours of shooting rocked the Pulwama district, south of Kashmir's main city of Srinagar, after officials said four soldiers, a policeman, three militants and a civilian were killed in the latest clash.

An army major was among the dead, along with three militants from Jaish-e-Mohammed (JeM) group which claimed last week's attack, military and police officials said.

Six senior army men including a brigadier and a lieutenant colonel were injured in the hours-long gun battle, a police official told AFP.

The identity of the militants was not revealed but local media reports said one of those killed was Abdul Rashid Gazi, a Pakistani national whose role in Thursday's attack was being probed by investigators.

Hundreds of soldiers raided villages and fired warning shots at a suspected militant hideout, unleashing the firefight in the village of Pinglan late Sunday.

Images showed flames and smoke billowing out of one of the residential houses in the area.

Government forces have launched a massive hunt since an explosives-packed van struck the convoy transporting 2,500 security men close to Pinglan on Thursday.

A video on social media purportedly shows a pre-recorded message by the 20-year-old Kashmiri suicide bomber warning of more attacks.

"The cruel terrorist attack in Pulwana shows that time for talks is over," Modi said after a meeting with Argentina's President Mauricio Macri in New Delhi.

Thousands of demonstrators staged angry rallies in several Indian cities over the weekend, with attacks on Kashmiris reported in several towns.

Protesters in New Delhi on Sunday burned effigies of Pakistani and JeM leaders.

Many small businesses closed Monday following a call for a nationwide shutdown.

In the capital, a Kashmiri man was beaten by a mob that accused him of chanting anti-India slogans. He was later detained by police.

A curfew remained in force for a fourth day in Jammu city, in the Hindu-majority part of Kashmir, where mobs attacked and set fire to properties belonging to Kashmiri Muslims.

Thousands of residents in the city have fled to Muslim-majority areas.

The government faces increased pressure because of an upcoming national election.

Some commentators have called for military action against Pakistan.

India launched what it called 'surgical strikes' on targets in Pakistani Kashmir in September 2016, 11 days after a militant attack on an Indian army base in Kashmir which left 19 soldiers dead. Pakistan denies the strikes took place. - APP/AFP