Turkish President Tayyip Erdogan is a man of his words: Vladimir Putin
18 Dec, 2020 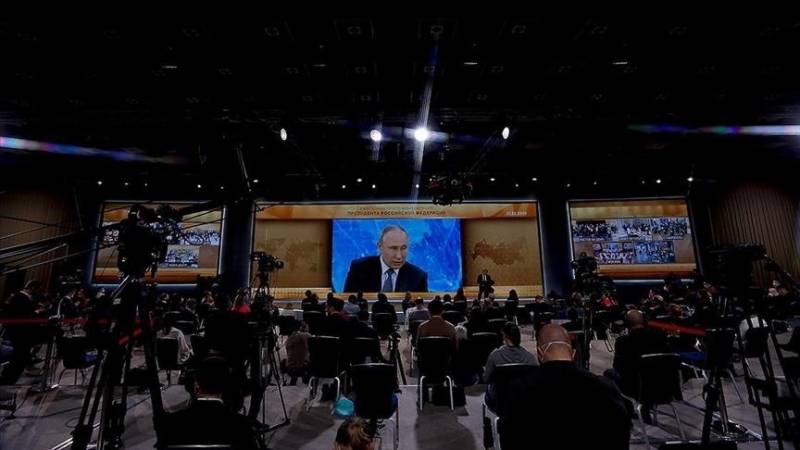 Asked at his annual news conference about the most difficult negotiator he had ever had to deal with, Putin said he did not approach the issue this way.

"There are no good and bad ones [leaders]. There are national interests. Sometimes it's necessary to make some compromises, other times there is a need to insist on our position. The rest is counterproductive," he said.

Setting his relations with Erdogan as an example, Putin said the two leaders often disagree and even have opposite views on some issues, but Erdogan for his country "goes all the way".

"We often disagree on certain issues with President Erdogan. Maybe sometimes even have opposing views. But he is a man who keeps his word. If he thinks it's good for his country, he goes all the way," Putin stressed.

Turning to the future relations between Russia and the US under Joe Biden's administration, Putin said he expects to settle at least some of the existing problems with him.

"The newly elected president of the US will understand what is happening, he is an experienced person in both domestic and foreign policy, and we expect that all problems so far, at least some of them, will be solved under the new administration," he said.

Particularly, he recalled that Biden spoke in favor of the renewal of the Strategic Arms Reduction Treaty (START), which expires in February 2021.

"Now there is a threat of termination of the START Treaty. Then there will be no restrictions at all related to the arms race, there will be nothing at all," Putin said.

The first Strategic Arms Reduction Treaty, START I, signed in 1991 between the US and the USSR, took effect in 1994.

The new START treaty, signed in 2010 by former US President Barack Obama and Russia's ex-President Dmitry Medvedev, sets a limit of no more than 1,550 deployed warheads and 700 missiles, including inspections to verify compliance with the deal.