Kashmir crisis is not about territory, It's about a Hindu victory over Islam: Washington Post
18 Aug, 2019 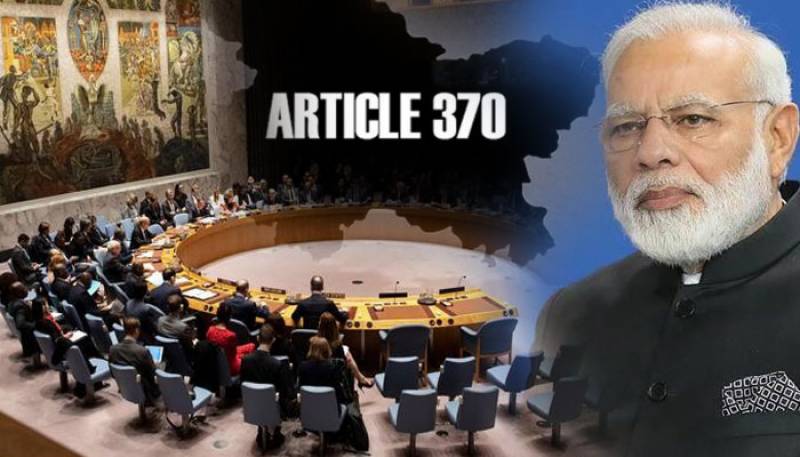 ISLAMABAD - In the Washington Post is an article by an Indian journalist, who said that "The Kashmir crisis isn’t about territory. It’s about a Hindu victory over Islam," and that Prime Minister Modi "used the Muslim-majority state as a demonstration of Hindu power."

Journalist and author Kapil Komireddi described the Indian crackdown in detail and wrote: Modi’s sudden takeover in Kashmir is the fulfillment of a long ideological yearning to make a predominantly Muslim population surrender to his vision of a homogeneous Hindu nation. It is also a way of conveying to the rest of India — a union of dizzyingly diverse states — that no one is exempt from the Hindu-power paradise he wants to build on the subcontinent. Kashmir is both a warning and a template: Any state that deviates from this vision can be brought under Delhi’s thumb in the name of “unity.”

He writes: Those who believe that such a day will never come — that India’s democratic institutions and minority protections will assert themselves — also never thought that someone like Modi would one day lead the country. Modi once seemed destined to disappear into history as a fanatical curio. As the newly appointed chief minister of Gujarat, he presided over the worst communal bloodletting in India’s recent history in 2002, when 1,000 Muslims, by a conservative estimate, were slaughtered by sword-wielding Hindus in his state over several weeks. Some accused Modi of abetting the mobs; others said he turned a blind eye to them."

"The carnage made Modi a pariah. Liberal Indians likened him to Hitler, the United States denied him a visa, and Britain and the European Union boycotted him," he said.

"But Modi expanded and solidified his appeal among India’s Hindus, a religious majority whose resentment at being invaded and ruled for centuries by Muslims had been papered over for decades with platitudes from India’s secular elites."

He used three powerful tools to propel his ascent. The first was sadism, the hint that, under him, Hindu radicals could indulge a dormant bloodlust: After the killing of a Muslim man in police custody, for instance, Modi mused at a 2007 rally, “If AK-57 [sic] rifles are found at the residence of a person … should I not kill them?” (The crowd roared back: “Kill them! Kill them!”)

The second was schadenfreude, an exultation in the torment of defenceless minorities: At an earlier rally in 2002, Modi had ruminated on the fate of the Muslims displaced by the recent Gujarat riots, asking: “What should we do? Run relief camps for them? Do we want to open baby-producing centers?” His audience erupted with laughter.

“We have to teach a lesson to those who are increasing population at an alarming rate,” he said.

The final affect was self-pity, a license for Hindus to regard themselves as the real victims.

He told Parliament that India had been a slave nation for more than 1,000 years and claimed that there were forces out to kill him.

"Since his 2014 election to the premiership, bigotry has been ennobled as a healthy form of self-assertion. Lynchings of Muslims — breathlessly demonized as jihadists devoted to seducing and converting Hindu women — by aggrieved Hindu mobs have become such a common sport that dozens of videos of grisly murders circulate on WhatsApp groups run by Hindu nationalists.

Last summer, a minister in Modi’s cabinet garlanded eight men who had been convicted of lynching a Muslim man.

In this universe, Kashmir could never remain autonomous, a place impervious to the desires of a majority happy to see its will done by violence. Modi’s reelection this year emboldened the supporters whose rage he skillfully incited. The prime minister rarely acknowledges the murders of minorities.

Rarer still are instances when he condemns them. Not once, in fact, has he memorialized, by name, Muslims slain by Hindu fundamentalists.

This is not an accident. It is a small step from letting Hindu vigilantes subjugate their Muslim neighbours to subjugating them himself, using the power of the state, as he has now done in Kashmir.

"Modi’s political awakening occurred in the training camps of the Rashtriya Swayamsevak Sangh, a right-wing paramilitary group that incubated the modern politics of Hindu nationalism. The RSS introduces young “volunteers” to the vast pantheon of supposed villains who plundered and emasculated India over the ages — the medieval Islamic invaders, the accommodationists like Mohandas Gandhi and the Congress party he led, the Muslim nationalists who mutilated India to create Pakistan and sought to abscond with Kashmir — and exhorts them to shed their Hindu impotence.

The effect on Modi’s young mind was so powerful that he came to regard the RSS as his family, abandoned his wife and mother, and wandered through India as a catechist of the Hindu nationalist cause.

"By seizing Kashmir, Modi has mollified votaries of Hindu nationalism and established himself as the father of what they proudly call the “New India."

Kashmir was always at the top of their wish list, which also includes the construction of a temple in Ayodhya, where a mosque stood for half a millennium before Hindu nationalists razed it in 1992; the erasure of small privileges granted to minorities (such as a subsidy for the Muslim pilgrimmage to Makkah); a legal end to religious conversions by Hindus; an extra-legal suppression of interfaith romance and marriages, especially when the bride is Hindu and the groom Muslim; and, ultimately, the rewriting of the constitution to declare India a formally Hindu state.